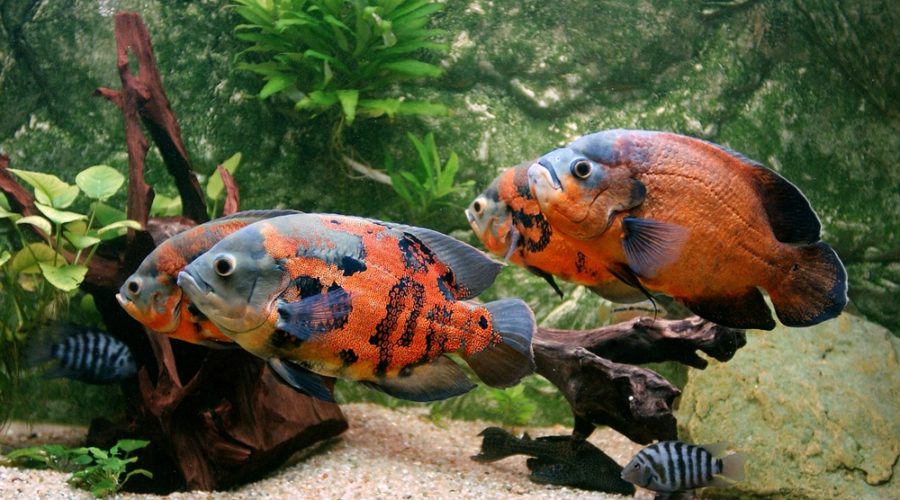 Oscars are some really beautiful and colorful fish. We don’t think that there is anybody who would argue with that. What is really interesting is that Oscars are not always so bright and colorful. What we mean to say is that they can and often do change colors.

Some people who have no owned Oscars before find this to be quite disconcerting, as many people automatically take it as a sign of illness. While this can be true in some cases, most often it is not. So, why do Oscar fish change colors?

The first reason why Oscars change colors is due to age. This is a fairly slow color changing process, but it is definitely noticeable if you pay attention. Oscar fish are not born all that colorful, they are actually fairly dull as fry.

However, as they age, they will begin to develop more colors, they become brighter, and various patterns become more pronounced. There are some similarities between various Oscars, but many of the mature in different ways. Not all Oscar fish develop the same colors or patterns as they age.

Another reason why Oscars change color is because of the mood they are in. It’s an emotional kind of thing. Once again, it is hard to describe exactly which colors an Oscar display in correlation with any given mood. Oscars are all different, and while many of them may display similar colors in relation to their moods, it can vary quite greatly.

Generally speaking, a happy and relaxed Oscar fish will be fairly dark in color, usually black, blue, or dark green, more or less a dark shade of their original color. Now, when they get angry or upset, they tend to get really bright in color.

They may display bright greens, blues, reds, and other really vibrant colors. When they are sad or anxious, they may display paler colors like a pale green, blue, red, or any other pale color variation of the colors they already have.

The final reason why your Oscar fish might change color is due to its own health or due to the water conditions. Generally speaking, a healthy Oscar fish will display fairly bright colors, whereas an Oscar that is ill will usually be much paler in comparison.

At the same time, closely related to the health aspect, Oscar fish usually exhibit dull colors when the water conditions are not up to par (more on how to check water quality here). If your Oscar is brightly colored, it is most likely healthy, happy, and living in good conditions.

Why Is My Oscar Turning White?

One possibility here is that your Oscar fish is suffering from a disease known as ich. Ich is caused by a parasite that causes fish to develop white spots, and although the whole fish will not turn white, areas, where there are no white spots, may turn pale in color.

Another possibility may be that your Oscar is suffering from HITH, or hole-in-the-head disease, which can cause white discoloration on the head. Generally speaking, there are many diseases and afflictions, including malnourishment, which can cause any kind of fish, including an Oscar, to turn pale and almost white.

Oscars do also change color depending on their moods and surroundings. They often become lighter in color when frightened or when surrounded by the lightly colored substrate.

Why Is My Black Oscar Turning Grey?

Oscars are often known for turning grey in color at times, especially black Oscars, which makes it all the more noticeable. There are various explanations for this, as Oscars do sometimes change color on their own, especially according to their surroundings.

Fish like Oscars tend to show much darker colors when their surroundings, especially the substrate, is also of a darker color, and vice versa.

So, lightly colored substrate may cause your Oscar to change colors in accordance. It is believed that this for camouflage and protective reasons.

Why Does My Oscar Have White Spots?

As touched on in the first question, there are indeed multiple diseases and parasites which may cause your Oscar to develop white spots.

Generally speaking, Ich is the most common cause of white spots all along the head and body, as well as the fins of fish, and it is caused by a parasite, it often involves your fish turning pale in color, and may lead to more serious afflictions down the road.

Another cause is of course HITH, or hole in the head disease, which often causes white spots around the eyes and mouth to appear. Fin and tail rot may also cause whiteness along the edges of the fins.

Why Is My Oscar Fish Laying On Its Side?

Oscar fish can be a bit moody and temperamental, and sometimes they may just lay on their sides if they are unhappy, but there are other causes as well.

They will often pout and lay down, for instance, if you move things around inside of the tank. It is hard to say why they do this, and sometimes the cause of them laying on their side can be stress, such as stress caused by too much transportation, bad food, unwelcome tank mates, and just improper water conditions in general.

As you can see, if you Oscar is mature, healthy, and happy, it should be fairly brightly colored. However, emotions such as anger and anxiousness can cause this to change. Their age also has something to do with color change. This is an interesting scientific phenomenon that requires some further research.