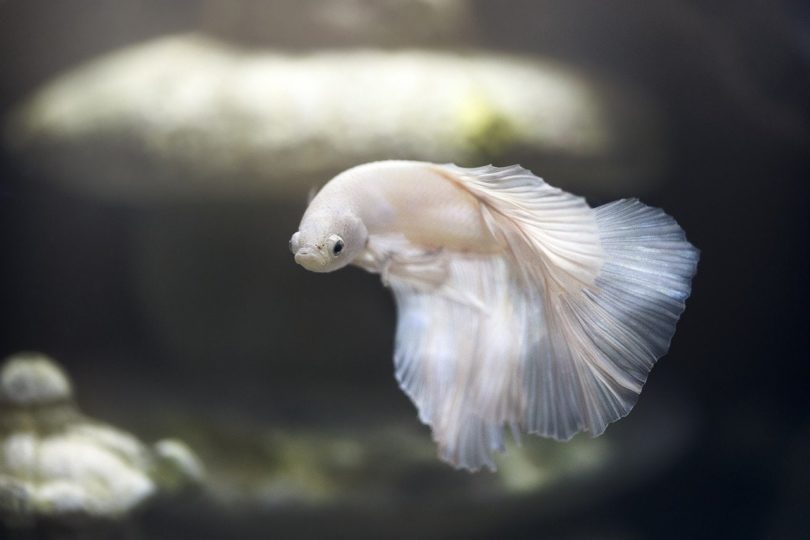 Betta fish are among some of the most popular species and certainly amongst the most beautiful fish available. They come in quite a wide variety of colors. They are particularly known for the vivid blues and reds and a variety of patterns like the piebald and the butterfly.

But there’s also the white opal betta – a not-so-well-known color variation. Probably because they aren’t brightly colored, but this doesn’t make them any less beautiful!

Not to be confused with the albino betta (although there’s debate if they even exist), the white opal will make a gorgeous addition to any aquarium, so do read on to learn more.

When you invest in a pet, it’s always a good idea to understand its background and natural habitat. These fish were originally named Siamese fighting fish due to their aggression towards other betta males and the fact that they come from Siam, now known as Thailand.

Wild bettas inhabit slower-moving and shallow, warm waters and are typically found in rice paddies, marshes, and floodplains. However, the wild counterparts of the bettas we’re familiar with are visibly very different. They tend to be a rather dull greyish-greenish color and don’t have the beautiful long fins and tails that we’re used to seeing.

To get the fancy colors and fins, it has taken many years of careful breeding and crossbreeding, and we’ve ended up with at least 73 different species of betta fish. And it’s the Betta splendens that give us the beautiful bettas, including the white opal variety.

The white opal bettas are not considered rare, but they aren’t as popular or as common as their brightly colored counterparts.

How Much Do White Opal Bettas Cost?

Currently, depending on the breeder or if you pick one up at a pet store, the price ranges from around $20 to $25. As we already discussed, the white opal isn’t very common, so it might take some time to find one, particularly if you’re looking for a specific tail variation.

Do your research into any pet stores or breeders before you buy your new betta, so you’re assured of a healthy fish.

Bettas are famous for being fighters. If you place two males in the same tank, they will fight, with the chance of one being killed in the process. Males might even be aggressive towards the females as well, but females tend to be able to live together in the same tank without any serious problems.

Otherwise, bettas are curious and friendly with their owners and tend to explore their environment. They are known to even develop personalities unique to each one.

The white opal betta is a pure white fish that has an opalescent sheen. They can sometimes appear pinkish in color, probably from the betta’s skin that is seen through their scales. But there are white opal betta fish keepers who swear that their fish is actually turning a very faint pink after some time.

Beyond the white, pearlescent shine, they do come with a variety of tails:

Female bettas aren’t as popular as males, as while they are also brightly colored, they tend to be slightly duller in color compared to the males. They also don’t have the large and ornate tails and fins.

How to Take Care of the White Opal Betta Fish

The smallest the tank should be is 2.5 gallons, but 5 gallons or more is ideal. The temperature should mimic the tropical temperatures that they are used to in the wild, which is 76° F to 81° F and a pH range of 6.8 to 7.5 but will do best with a neutral level below 7.0.

Avoid direct sunlight as you can’t control the temperature of your tank with it, but you should still have natural day and night cycles for your betta.

You’ll also want to invest in a sponge filter, thermometer, siphon hose, and water conditioner for water changes (read up on how to accomplish this before attempting it). The water should be slow-moving since that’s what they are used to and will become easily stressed otherwise.

The substrate should be smooth in order to avoid snagging their delicate fins and tails. Look for fine and smooth gravel or sand.

You can use live plants, which can do a fantastic job at removing the ammonia from the tank, but you can also use artificial ones. Just opt for silk plants and double-check that there isn’t any roughness on them that will snag those delicate tails and fins. You can try running something like pantyhose down any plants, which will safely test the smoothness.

Lastly, investing in a water heater is a safe way to maintain the aquarium’s temperature. Some even include a thermometer.

Just remember to treat any tap water with the water conditioner to remove chlorine and other dangerous chemicals, and never use distilled water.

As we already mentioned, if you have a male white opal betta, never put another male betta in the same tank. Or a female unless you’re breeding, and it would only be for a short period of time.

You’ll want to use an 8 to 10-gallon community tank, and the best tank mates for the betta are not aggressive and don’t have long fins or bright colors.

Many bottom feeders make great tank mates for bettas such as loaches, corydoras, and plecos. You can also consider rasboras, croaking gouramis, and Poecilia.

You’ll want to avoid tank mates such as angelfish, parrotfish, killifish, or oscars. Just research any fish you’re considering adding to your betta’s tank. There’s also a lot of message boards and forums out there devoted to betta fish keepers that will be happy to help.

What to Feed Your White Opal Betta

Bettas eat larvae and insects in the wild, so you’ll need to feed your white opal a protein-rich diet. There are flakes, pellets, freeze-dried, and live food options available, but their favorites tend to be freeze-dried brine shrimp or bloodworms, and they also enjoy daphnia.

You’ll want to avoid the typical flakes and look for special betta pellets and supplement with freeze-dried or live foods.

Bettas should be fed twice a day and only enough that they can eat within a few minutes. If you give your betta a treat and it seems uninterested, try to remove it, so it doesn’t rot.

Overfeeding your betta can give it gastrointestinal problems, and the excess food will contribute to your aquarium’s pollution.

Keeping your tank clean and the water parameters balanced are key to your Betta’s health. This also means regularly changing the water, which works out to about 20% of the water about once a week (this is for a filtered tank as an unfiltered tank will need more water removed more frequently).

You should clean the filter and decorations on a regular basis as well. Just don’t use soap for cleaning as this can poison your pet. It’s okay to use distilled vinegar or bleach to give these items a deeper clean but rinse as thoroughly as possible before putting them back in your aquarium.

Keep an eye on your white opal betta’s color as if it starts looking more pink than usual, there could be a health problem. Otherwise, ensuring your betta has a healthy diet and that you keep the water at the right temperature with a heater should all contribute to a healthy betta.

You need to set up a breeding tank, which should be about 10 gallons with no substrate. You start by placing the female betta in the breeding tank and give her time to acclimate – usually 30 minutes. Then you can put the male in with the female, and they should engage in a number of mating rituals.

Part of the rituals includes the male creating a bubble nest, which is a cluster of tiny bubbles that clump together at the top of the water. Interestingly, a happy male betta will make bubble nests throughout his life even when there isn’t a female around. Once done, the male waits for the female under his nest, and then they’ll engage in mating.

The female will start laying eggs, and once she’s completed this, you should remove her and put her back in her own tank. The male will then begin placing the eggs inside the bubbles and spend as much as 3 days taking care of the nest and the hatchlings.

Once the fry are starting to swim on their own, you should remove the male white opal and place him back in his tank, and you can start feeding the fry.

Are White Opal Bettas Suitable For Your Aquarium?

White opal bettas are perhaps even more striking than their colorful cousins because of their uniqueness. You can read up on the betta fish in general if you need further information since the white opal is just a differently colored version of Betta splendens.

Bettas are intelligent and fun fish to raise, so be sure to do your homework before you invest in this tiny fish so you can enjoy its company for as long as possible.

Most Comprehensive Book on Betta Fish Keeping in 2022