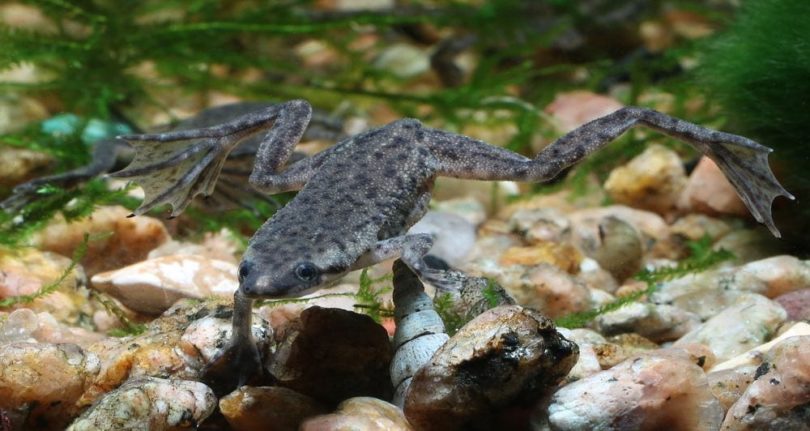 Well, African dwarf frogs are omnivores, scavengers, and hunters, so in the wild, they’ll eat more or less anything that they can fit into their tiny mouths. When it comes to pet African dwarf frogs, a mix of frog pellets and other foods is recommended.

As mentioned in our opening salvo, African dwarf frogs are both hunters and scavengers. They will hunt for insects, grubs, worms, and miniature fish, but they’ll also scavenge food off dead animals that are small, plus they eat other things too.

Something important to know here however is that African dwarf frogs are of course very small, so when it comes to live foods, size does matter.

What Should I Feed My African Dwarf Frog?

African dwarf frogs should be fed a variety of foods in order to meet their dietary requirements. Now, these frogs are omnivores, but that said, they do eat a lot of insects and other such protein sources, so they should be fed a fair amount of animal-based protein too.

A good way to go here is with some high-quality frog food, which usually comes in the form of small pellets. These frog pellets are designed with balanced nutrition to meet the dietary needs of your African dwarf frogs.

You should feed these to your African dwarf frogs about twice per week. Your frogs may not like the pellets as much as the other foods we are about to talk about, but the pellets are very healthy for them.

Now, for the rest of the weekly feedings, you can choose from a variety of foods. Things such as;

Something to keep in mind is that virtually all of the foods we have covered here come in freeze-dried versions.

Freeze-dried foods are great because they are free of parasites, thus making them safer than live or frozen foods.

However, remember that freeze-dried foods need to be rehydrated before being fed to your African dwarf frogs.

What Do African Dwarf Frogs Eat In The Wild?

As we have mentioned once before, in the wild, African dwarf frogs will eat virtually anything that they can catch. Yes, they do hunt for things like very small fish, flies, mosquitos, grubs, beetles, insect larvae, and small spiders too.

However, if possible, they will choose to stick to live foods that live in the water, not on land. If they can not catch them live, they will most likely also eat recently deceased animals. More or less, if the frog can fit it in its mouth, it’s going to be food.

However, let’s keep in mind that African dwarf frogs are very small and they make for easy prey for larger predators, and therefore they come out to hunt as little as possible.

Yes, betta fish food will do in a pinch and will stop your frogs from going hungry, but it should not be used as a main source of food for any prolonged period of time.

With that being said, these frogs can easily go for a few days at a time without eating. In the wild, they may eat only every few days to avoid being eaten as much as possible.

Most owners of African dwarf frogs will feed them every 2 days, or even just every 3 days. If you want to go this way, make sure to feed them enough to fill them up.

A popular feeding method for these little frogs is to feed them on Monday, Wednesday, and Friday. If you do this, feed them a little more than usual on Mondays to make up for the two weekend days where no food was provided.

In terms of how much to feed them, they’ll be full after about 20 minutes of eating. After roughly 20 minutes, remove uneaten food from the tank to avoid overfeeding the African dwarf frogs and to avoid good rotting in the tank.

What Time Should You Feed Your Frogs?

In the wild, these African dwarf frogs are actually nocturnal, which means that they come out to eat at night. Simply put, there’s less of a chance that they will get eaten during the night, as there are fewer predators about.

Therefore, if you want to simulate their natural environment as closely as possible, feeding them at night is what you want to do.

Quite honestly, as long as you maintain a regular feeding schedule, it really does not matter what time of day you feed your African dwarf frogs, as long as it is consistent.

It is best to feed them in the morning or evening, but really any time throughout the day is fine. Just don’t feed them dinner one day and then breakfast on another.

How Do I Get My African Dwarf Frog To Eat?

This is really not an issue as African dwarf frogs are opportunists and they need absolutely no encouragement to eat. If they see food, they eat it.

Now, that said, they may not always go for food right away, want to eat, or see that food is present. Here are some tips on how to get your African dwarf frogs to eat.

Do I Need A Feeding Station?

How To Tell If I Am Over Feeding?

A problem with African dwarf frogs is that they are cold-blooded and fearful of predators, which means that they are ultimate opportunists. They never know how long away their next meal will be, so to ensure that they survive, if they see food, they will eat it.

This is fine in the wild, as there’s not much of a chance that they will over-eat. However, in captivity, frogs always seem to be hungry, and therefore, if you give them food, they will eat it. In captivity, quite literally, frogs will eat until they die, if given the chance.

Of course, overfeeding your African dwarf frogs is not good, it can make them fat, and it can lead to health issues too.

If your African dwarf frogs are gaining lots of weight or seem to be bloated, and they are already fully grown, then chances are that you are overfeeding them. Although it is rare, if the frog does not eat when you give it food, it’s either not hungry or sick.

Based on the fact that you should feed your African dwarf frog about as much as it can eat in 20 minutes, twice per day, if you are feeding it more than this, you can be sure that the frog is overfed. If you feed it every single day, do not feed it for longer than every 5 minutes.

How Long Can African Dwarf Frogs Go Without Food?

In the wild, these frogs will go without food for 2 or 3 days at a time, but realistically speaking, they could go for up to 4 or 5 days without food.

They won’t starve to death without food for up to 4 or 5 days, but beware that this is pushing it to the limit.

When it comes down to it, African dwarf frogs are easy to feed. Just give them a mix of specialty frog food and other live or frozen foods.

Make sure not to overfeed them. That’s about it. If you like colorful and exciting creatures, African dwarf frogs do make for great pets.