Feeding Human Food to Betta Fish – Which Are Safe? 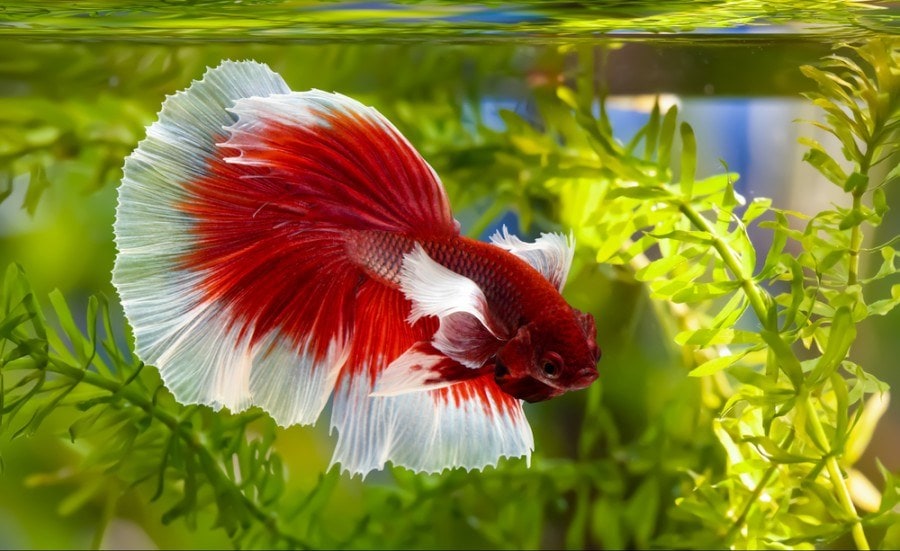 We really do love Betta fish, as do thousands of other fish enthusiasts around the world. These aggressive yet beautiful fish have quickly become one of the most popular home aquarium fish choices in existence today.

In the wild, Betta fish are carnivorous. They love to eat meat of all kinds. They will eat pretty much any kind of meat that they can wrap their mouths around. This includes all kind of insects and insect larvae, daphnia, brine shrimp, blood worms, and other such creatures too.

They are fairly hardy and prolific eaters, or in other words, they don’t hold back. They like to eat quite a bit, especially when it comes to live foods like insects.

Now, some Betta fish do occasionally chow down on plant matter, but not very often. If you see a Betta fish eating plants, fruits, or veggies in the wild, it is probably because they have not been able to catch enough live prey.

However, there are some Betta fish which have been shown to enjoy the occasional herbivorous treat. It does kind of depend on the Betta fish in question. That being said, for the vast majority of Betta fish, they are something like 90% carnivorous.

What Foods Do Betta Fish Eat In The Wild For The Most Part?

When it comes to human food, the vast majority of our foods are simply not suitable for consumption by Betta fish. You can rule out any kind of processed food like salami or bologna.

Those chemicals and preservatives will not do your Betta fish any good and can very well make them really sick. There are some foods that you can feed your Betta fish, ones that you might eat yourself, but you can’t feed them exclusively human food.

For the most part, you should be giving them special Betta fish food or other things that they would normally eat, like the worms and insects we discussed above. That being said, there are some human foods that you can feed them.

Just keep in mind that the majority of the Betta fish’s diet needs to be meat-based, so any human food you give them needs to be done occasionally as a treat, not as a meal or meal supplement.

What Are Some Human Foods You Can Safely Feed Your Betta?

Boiled peas with the shell removed can be eaten by Betta fish. Make sure to remove the skin because it is hard to digest. A couple of boiled peas are actually shown to help relieve digestion issues in Betta fish.

Cucumber and lettuce are also good things to feed your Betta fish. They have lots of vitamins in them and are easy to digest. Just don’t give them too much of either of these things and make sure to cut them into really little pieces.

Some lightly boiled or microwaved spinach will work too. Some Betta fish don’t like it while others do. It is a matter of tastes here. Just make sure to lightly cook it first because it can be hard for fish to digest.

Boiled kernels of sweet corn is another treat that most Betta fish will like. Keep in mind that corn is virtually void of nutrients, so it can only be fed to Betta fish as an occasional treat.

Meats like chicken, beef, and pork can be fed to Betta fish in very small quantities. Now, most people are against this simply because it is unnatural for a water-dwelling creature to eat a land-based animal, but it is not technically harmful.

Make sure to boil the meat all the way through and add absolutely no spices. The only downside is that our meat is often made with antibiotics and steroids which are probably not so good for Betta fish to consume.

Betta fish will definitely enjoy some fresh fish pieces and other types of seafood. Little chunks of shrimp, oysters, scallops, and other such creatures make for good treats no doubt.

The upside here is that these foods are all animal protein-based, which means that you can technically substitute fish food with these meats on occasion.

On a side note, if you are giving your Betta canned tuna, make sure it is not packed in oil. Oil is not good for fish, nor will it do you any favors in terms of water quality.

While you can feed your Betta fish a little piece of an unsalted cracker every now and again, it is not recommended due to additives.

Let’s just quickly go over some of the most important tips to follow for feeding your Betta fish. You should definitely follow these if you want a really happy and healthy Betta fish.

While Betta fish can eat some human foods, for the most part, we would recommend sticking to their regular diet.

However, no, they should not eat bread. Bread, crackers, and other such things contain yeast. Yeast expands and caused constipation in fish.

Severe constipation can lead to a variety of more serious issues, which will then lead to death.

Yes, you can feed your betta fish some apples, but not much. In the wild, apples are not a part of their regular diet, and while not too bad for betta fish, large amounts of apples should be avoided.

Simply put, while giving your betta fish some small apple chunks won’t kill them, it isn’t the best either.

What to feed betta fish when out of food?

If you happen to be out of fish food, there are some great things you can feed your betta fish, just so it won’t starve before you go out and buy more betta fish food.

So, this is kind of a two-sided scenario. Betta fish can eat some human foods, while others they should never consume. In terms of the human foods they can eat, they still should not eat too much of them. Sticking to their regular diet is the best course of action.

New Goldfish Supply List: All the Gear and Things You Need to Know!