What Are Bloodworms Used For? 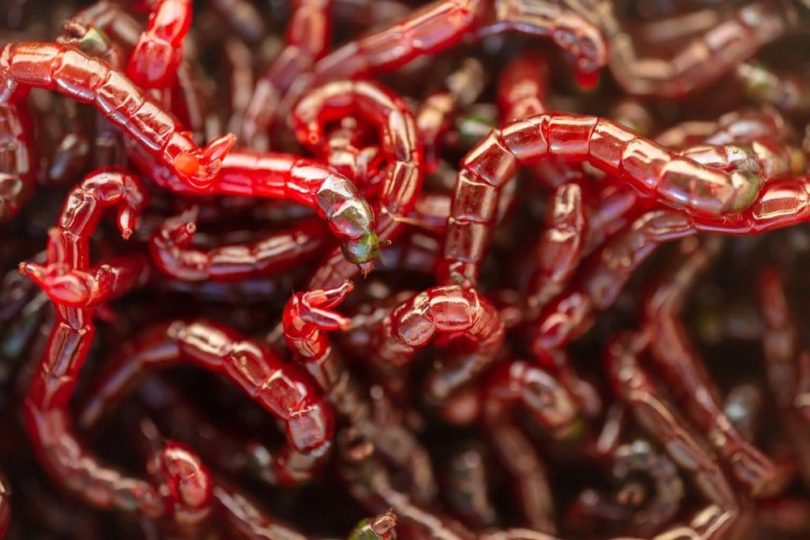 You might have heard of bloodworms before, especially if you keep your own fish in a home aquarium. This might also be the case if you are an avid fisherman. There is no doubt about the fact that these little worms do not look nice.

They actually look rather repulsive to say the very least. However, this does not mean that they cannot be useful in certain ways. Let’s take a closer look at the bloodworm, what it is, what it is used for, and how you can breed and raise them at home.

These ugly little worms have a large proboscis with 4 hollow jaws. These jaws contain venom glands which they use to incapacitate and kill their prey, making quick snacks of them. They only eat other small insects and the larvae of insects. However, their bit is actually painful to humans. They have been known to cause severe allergic reactions, but no worries because their bite will not kill you.

These things look slimy, they are red, partially transparent, and they can grow to 14 inches or 35 centimeters in length if they are healthy and left to grow. They are usually always found underwater, living in sandy, muddy, and silt-covered bottom layers of intertidal or sub-tidal regions. Although they can handle a bit of salt in the water, too much of it will kill them.

When it comes to the uses of bloodworms, there are not really too many. To be honest, most people do not want to look at these nasty little things, let alone touch or breed them. However, there are people who do not mind them, in which case they do have a few good uses.

Their main use is most often for fishing, especially for things like bass and trout. Their meaty texture is something that fish love, especially big predatory fish. This is why the main market for bloodworms is the fisherman market. Fishermen often use these slimy little bloodworms for baiting their hooks.

However, many people who own aquariums also use bloodworms to feed their fish. These things are rich in protein and minerals, making for healthy snacks for fish that need lots of protein in their diets. Of course, these worms are aggressive and carnivorous, so you do not want to let them grow to their full 14 inches in length before feeding them to your fish, especially if the fish are small.

These worms could potentially do some serious damage to smaller fish when they are fully grown. Yet, this is why people do not feed fully grown bloodworms to their fish, due to the dangers they can pose.

With that being said, young bloodworms make for the perfect meaty treat and an awesome break from fish pellets and fish flakes. Needless to say, you will probably want to wear a thick pair of gloves when handling these things.

How Long Do Bloodworms Live?

Bloodworms are pretty interesting creatures, and this question is actually a little difficult to answer. The thing is that first, the eggs of the midge are laid. After a few days, these eggs hatch into the larvae, which are the bloodworms.

These bloodworms will then eat as much food and organic matter as they can for up to 7 weeks. After 7 weeks of being a bloodworm, it will enter its pupal stage, in which it will stay for about 3 days, after which the fully developed chironomid midge will emerge.

Therefore, if you are looking to breed and raise bloodworms in order to feed your aquarium fish, they should be fed to your fish in the first 4 weeks of being bloodworms, if not much sooner, as if you leave them for too long, they may grow too large for smaller fish to consume.

In other words, these things do not have a long shelf life, and thus, breeding needs to happen constantly if you want a steady supply of usable bloodworms to feed your fish.

How To Breed Bloodworms

Breeding bloodworms is honestly quite difficult. No, raising them is not hard. In fact, these things are very low maintenance, and unless you burn them alive, there is pretty much no way you can mess up raising a bunch of bloodworms.

However, with that being said, breeding them is a bit of a different story. At any rate, let’s go through a quick step-by-step process on how you can breed and raise bloodworms without too much trouble.

At the end of the day, while bloodworms may look super unattractive, they are pretty useful for feeding fish and they are not hard to raise, either. Finding enough eggs to create and sustain a constant population is, however, not very easy.