The ryukin goldfish is a distinctive short-bodied fish. It’s a far-cry from the more streamlined and slim common goldfish, but many people prefer goldfish with a more unique appearance.

Since they’re an active and agile fish, they’re a pleasure to observe, too.

What you must remember about any fish of this type is that they have more health problems, so you should be prepared to deal with one or two issues, should they arise.

Read on to find out all the basics, and more, about the ryukin.

The ryukin goldfish has a similar appearance to the fantail, but for the impressive hump that begins just behind the head.

Like a fantail, this type of goldfish has a split caudal (tail) fin, which is fairly long and flowing in a standard ryukin, but can be almost twice as long as the body in different varieties.

An egg-shaped goldfish with a short and stubby look, but a very deep body, the ryukin’s high back is often referred to as a “dorsal hump.” The very best specimens have a prominent dorsal hump, but it’s much subtler in some fish.

Ryukins originally only came in red, but can now be found in a range of colors. This includes blue, black, white, chocolate, calico, and bi-color.

A standard ryukin goldfish has a relatively short tail, but you can also find long-tailed varieties known as fringe-tail or ribbon-tail ryukins.

How Big Can Ryukin Goldfish Get?

The average ryukin goldfish reaches a size of about 6 inches in length. However, they can grow larger. Some owners have reported their ryukin growing to as much as 10 inches long, but only when kept in a pond or a large, well-maintained aquarium.

How Old Can They Live?

Goldfish live far longer than most people assume. If properly cared for, a ryukin should live for at least 10 to 15 years, but it’s not unheard of for them to reach as old as 20.

All modern goldfish are descended from carp kept in ponds in China, which were gradually domesticated and bred to type.

But, in their slightly more recent history, ryukin goldfish were developed in Japan in the late 1700s and early 1800s from a stock of fantail goldfish imported from China. They were brought to Japan via the Ryukyu Islands, which is where this fish got its name.

Ryukin are one of the hardier types of goldfish, so in that respect they’re quite easy to keep.

That said, because of the shape of their bodies, they’re prone to swim bladder issues so you should take precautions when feeding them – but more on that later.

Beyond the regular care requirements of a goldfish, ryukins don’t have many specific needs.

However, as mentioned above, you need to be mindful when feeding your ryukin, as they’re prone to swim bladder disease, but we’ll tackle that topic further in the “feeding” section. Some experts also believe keeping nitrates below 20ppm can help avoid swim bladder complaints.

All goldfish are somewhat prone to swim bladder issues – some of which are caused or exacerbated by food.

If goldfish take in too much air when feeding, eat the wrong kinds of foods and become constipated, or have food ferment in their guts, it can restrict their ability to control their swim bladder.

The result of which is they might end up floating to the top of the tank and be unable to move lower in the water, or they may flip over so they’re swimming around on their back.

Because of the ryukin’s unusual body shape and caudal hump, they’re even more likely to get swim bladder issues than your average goldfish. The good news is, if you’re careful about what, how much, and how often you feed them, you should be able to prevent these problems occurring.

Avoid feeding your ryukin floating flakes and pellets, as they might take in too much air from the surface when feeding.

If you’re going to feed sinking pellets, make sure you soak them first so they don’t expand in your fish’s digestive system, causing blockages and/or constipation. You should also feed your ryukin goldfish a small amount several times a day rather than a large amount once a day.

Apart from this, try to feed your ryukin a varied, well-balanced diet, just like you would any other goldfish. Since they’re omnivores, they thrive on consuming a range of plant-based and animal-based foods, in addition to a commercial goldfish food.

The correct aquarium set-up will help keep your ryukin healthy, as well as providing adequate mental and physical stimulation.

Ryukin might not be the largest of all goldfish, but they still reach 6 to 10 inches and need plenty of space to move around.

Start out with a tank of a minimum 20- to 30-gallon capacity for a single ryukin, then add another 10 gallons per additional fish in the same aquarium. So, for example, you’d need a 60- to 70-gallon tank to house five ryukin (or a mixture of ryukin and other suitable tank mates).

Remember this is the minimum size required – bigger is always better if you have the space and the budget, plus you then have the option to add more fish in future without having to upgrade your tank.

We’d generally recommend a cuboid tank that’s longer than it is wide. This gives your fish plenty of horizonal room to swim and means the water is oxygenated better due to the larger surface area.

Goldfish produce a lot of waste comparative to their size, so an effective filtration system is a must-have for your ryukin.

All fish-keepers have their preferences when it comes to water filters, so choose a method that works for you, but we would recommend some form of biological filtration.

Make sure whatever filter you choose is strong enough to deal with the volume of water in your aquarium – and remember it’s better your filter is slightly too strong than not strong enough.

Substrate isn’t essential for your ryukin, but you might find a tank with a substrate looks more attractive than a bare-bottomed tank. That said, substrate is somewhat beneficial for a couple of reasons.

Goldfish are natural foragers, and you’ll notice them rooting around in the substrate looking for morsels, which helps keep them occupied. Plus, good bacteria may live among the substrate, which helps maintain a healthy aquarium eco-system.

When picking a substrate, either choose fine sand or smooth gravel that’s too large for your fish to swallow.

Aquarium lighting helps to create a day/night cycle, plus it means you can view your fish better at night or when it’s gloomy out.

If your fish are kept somewhere with a lot of natural light, you don’t have to have artificial lighting, but since most aquariums come with a light built-in to the lid of the tank, most fish-keepers opt to use it. Plus, it makes your tank look brighter and more interesting.

Try to keep the lights on for roughly 12 to 16 hours a day, and off for 8 to 12 hours a day. Ideally, use a timer to regulate this so you don’t accidentally forget.

Your ryukin should be kept at a temperature between 65 and 78 degrees Fahrenheit. That means, in most cases, you won’t require a heater.

In fact, ryukin are rather hardy and can tolerate lower temperatures than this – for instance if they live outdoors in a pond – but a very sharp drop in temperature can be fatal, so it’s best to maintain your tank within the above parameters.

While not aggressive, ryukin are fast swimmers, so they’ll outcompete most other types of fancy goldfish for food. Therefore, suitable tank mates include other quick, agile fancy goldfish, including oranda goldfish, lionheads, fantails, and other ryukins.

Some people claim they can even compete for food against long-bodied single tail varieties, such as shubunkin and common goldfish, but it might be a bit too risky, as your ryukin could end up malnourished if they don’t get their share at meal time.

Video: A Look at the Ryukin Goldfish

The video below shows how ryukin goldfish grow and change over time. This is especially note-worthy if you get a young ryukin and want to know if their development is on track.

The ryukin is an attractive and popular choice of goldfish, that doesn’t have too many specific requirements to meet their needs, beyond being mindful of their propensity toward swim bladder issues when feeding them.

As long as you’re prepared to look after a fish that could live for up to 20 years, the ryukin would make an excellent addition to your aquarium. 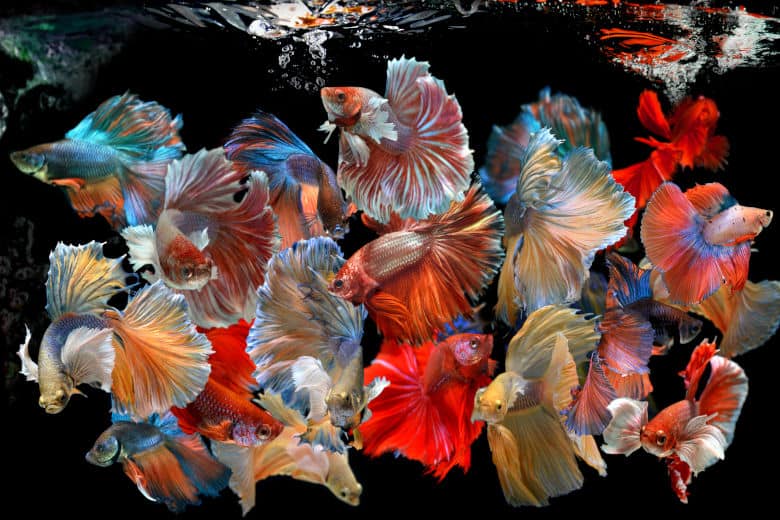