How To Get Rid of Red Algae In A Saltwater Tank

Want to know why there is red slime algae in your saltwater tank? and how to remove, control and prevent it? this article has the answers you need. 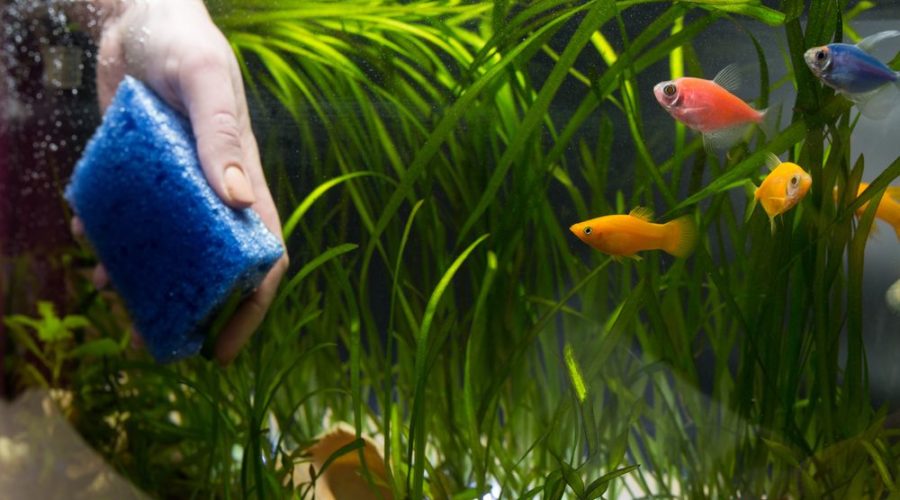 Red algae growing in your saltwater fish tank can be a really problematic issue, both for your plants and fish. Having an aquarium can be really fun and rewarding too, but not when you have an invader taking over the space. Let’s not waste any more time and get right to it. We want to talk about what red algae is, how you can identify it, what causes is, how to prevent it, and how to remove it too. Get ready to say goodbye to that nuisance called red algae. We’re about to destroy it!

Red slime algae in your saltwater aquarium can be caused by a number of things, mainly high levels of waste, old lightbulbs, and a lack of water circulation, among other things.

Besides regular water changes, there are a number of things that you can do to get rid of marine red algae.

What Is Red Slime Algae?

Red slime algae is technically not algae at all, but a type of bacteria known as cyanobacteria. That said, algae cyanobacteria looks like algae and it also behaves as such.

Moreover, cyanobacteria aquarium growth is also caused by many of the same things that cause other forms of algae to grow in a reef tank or aquarium.

Not only does algae red slime not look nice in the aquarium, but it can actually be quite harmful too.

What Causes Red Slime Algae In A Saltwater Tank?

The fact of the matter is that there are a number of things that cause this cyanobacteria red slime algae to grow in a reef tank.

Let’s take a closer look at all of the reasons why cyanobacteria red slime algae might grow in your reed tank.

The main cause of cyanobacteria red slime algae growth in a saltwater aquarium is if there is excessive waste.

Cyanobacteria red slime algae thrive on both phosphate and nitrates. These are organic compounds that fuel the growth of this red slime.

A Lack of Filtration

Related to the first point, another reason why cyanobacteria red slime algae grows in reef tanks is that your filter might not be working properly.

All of that phosphate and nitrate in the tank needs to be broken down by beneficial bacteria and filtered out of the water.

However, if your filter is not working properly, particularly in terms of biological filtration, it won’t be able to break those compounds down, thus leaving excess nutrients in the water for the cyanobacteria red slime algae to feed on.

The next cause of cyanobacteria red slime growth in the aquarium is due to improper fish feeding, mainly overfeeding.

If your fish don’t eat all of the food you give them, that food will break down in the tank and start released ammonia, phosphate, nitrates, and more, all of which make for perfect food for the red slime.

Moreover, fish that eat too much are also going to create more waste. What goes in one end has to come out the other end., and this can feed the red slime. thanks to those excess nutrients.

Yet another cause of red slime growth in fish tanks is decaying plant matter.

Just like fish food and fish waste, decaying plants will release organic compounds into the tank which act as food for the red slime.

What is interesting is that your aquarium lights may also be to blame for excessive algae growth in your aquarium.

The reason for this is because as aquarium lights get old, particularly past their best by use date, the spectrum of light which they release slowly changes.

A Lack of Circulation

Yet another cause of red slime growth in your tank is a lack of circulation.

If there is no circulation at all, the bacteria can get lodged in certain places and multiply there, especially on solid surfaces such as on live rock. Proper tank circulation is a pretty big deal here.

A Lack of Water Changes

Finally, if you don’t change the water in your tank enough, all of those nutrients and compounds can build up in the tank, and this is the case even if your filter is working properly.

How To Get Rid of Red Slime Algae?

Seeing as there are so many causes of this algae growing in your aquarium, there are therefore also several ways to remove this red slime.

Perhaps the best way to get rid of red slime in your tank is to increase water changes and to perform them regularly. Try changing about 30% of the water on a weekly basis.

However, make sure to not change more than 30% of it per week, because you don’t want to remove too many of the beneficial bacteria from the equation, the same bacteria which actually break down nitrates and phosphates, the food which this algae needs to grow.

To remove red slime from your tank, another thing that you should be doing is maintaining your filter. Bacteria can build up in the filter media and in the various components of the filter.

Moreover, filter media gets old and loses efficiency. An unclean filter may also be clogged, and thus may not be working at full capacity.

Remember, your fish need to have a working filter because it removes fish waste, uneaten food, and dying plant matter via mechanical filtration, and will remove organics via biological filtration.

Therefore, make sure to clean your filter on a regular basis, make sure you have the right kind of media, and ensure that it is of a large enough size as well.

Something else that can help get rid of red slime is if you put some live rock in with the other rocks and plants.

Therefore, a few live rocks can go a long way in building up enough bacteria to allow for more efficient biological filtration in the tank.

If you want to get rid of red slime in the tank, you definitely need to practice proper fish feeding techniques.

Remember that overfeeding leads to rotting food in the tank as well as excess waste being produced by the fish, both of which literally feed the red slime.

Therefore, do some research on how much and how often your specific fish need to be fed, and this should go a long way in helping to solve this issue.

Yet another solution to this rather annoying problem is to increase the circulation, particularly in dead areas.

You might have large plants, rocks, or decorations in the way which stop the circulation of liquid, which then leads to dead areas where bacteria and the food they eat can build up.

Therefore, rearranging the items in the tank to allow for better flow and circulation can prevent bacteria from building up.

Another solution is to just ramp up the power on your filter and maybe even add a strong powerhead to the mix as well.

To rid yourself of that red slime in your saltwater tank, an easy solution that can help is to change those old lights, particularly if they have run for more hours than they are advertised for.

It might not be the cheapest solution, but old lights are a leading cause of algae growth.

7. Chemicals as a Last Resort

The other option that you have at your disposal is to use special red slime killing chemicals that are safe for reef tanks.

There are a variety of options out there, but just be sure to always follow all of the directions on the label.

We have also covered a guide on finding the right salt mix here.

As you can see, getting rid of red slime is not overly difficult, and even better is if you follow all of the steps above, but instead of using them as a form of treatment, use them as preventative measures.