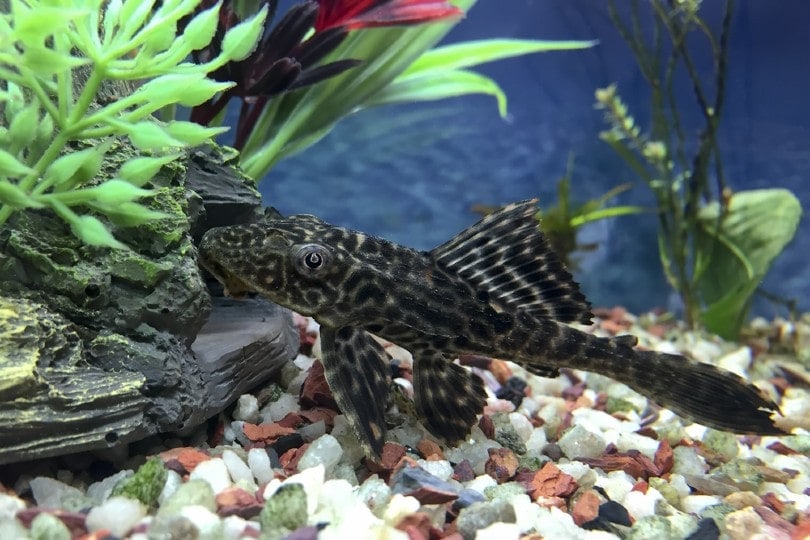 Anyone who has ever considered getting an algae eater of some sort has heard of Plecostomus. These fish from the armored catfish family have beautiful patterns and come in multiple types. Whether you have a small or large tropical tank, there is likely a Plecostomus for your tank.

However, there are major considerations before bringing home a Plecostomus. Some varieties of Plecostomus are inappropriately sold in most major pet stores, causing them to go to homes that aren’t prepared for their long-term needs. Here are some of the things you need to know about Plecostomus before you consider bringing one home.

There are approximately 150 types of Plecostomus that have been discovered, and somewhere around 15 of them are routinely involved in the pet trade. The common Pleco is an extremely popular Plecostomus, but these fish can reach extremely large sizes, making them poor choices for the average home aquarium. This has led to the rising popularity of some smaller varieties of Pleco, like the Bristlenose Pleco, Clown Pleco, and Zebra Pleco. Most varieties would be considered easy to care for, although some Plecostomus have more complex needs, giving them moderate care needs.

This broad range of fish varies from omnivorous to fully herbivorous, with some being prominent algae eaters and others consuming driftwood or dead animals. These fish are naturally found in South America, and the most commonly seen Plecos in the pet trade prefer tropical tank environments. Due to many Plecostomus ending up in improper tank environments, people have released some into the wild in the US, leading to them being an invasive species in some areas.

How Much Do Plecostomus Cost?

When determining the cost of a Plecostomus, consider the expense of a proper environment. A Common Pleco will require a large tank that could be costly. Smaller Pleco varieties will be less expensive to get set up. All Plecos require a tank environment with driftwood and plenty of hides, so consider these costs as well.

Plecostomus are generally peaceful fish that keep to themselves. They are naturally nocturnal, so it is not uncommon for them to hide throughout the day and become active at night. In community tanks, some Plecos become active during the day, so you may see your Pleco out and about.

Some Plecos have aggressive tendencies, mainly toward other Plecos. This is usually due to being territorial. This aggression is usually related to a tank that is too small, so if your Pleco is becoming aggressive, it may need a larger tank. There have been anecdotal reports of Plecos attacking fish with thick slime coats, like goldfish, and sucking their slime coat, injuring the fish.

Plecostomus are from the armored catfish family. This means that they are covered in thick, protective scales that create an armor-like covering on their head and upper body. There are multiple varieties that are routinely spotted in home aquariums and pet stores.

Here are some Pleco varieties you may come across:

This large variety of Pleco can exceed a foot in length. They tend to be the most aggressive of the commonly seen Plecos. They are often dull in color and have white, tan, brown, or black markings.

These popular Plecos have dark bodies with interesting patterns that tend to either consist of stripes or maze-like patterns that are yellowish or cream in color. At most, these Plecos reach 4 inches in length, but they usually stay closer to 3-3.5 inches.

These beautiful Plecos are named for their zebra-like patterns. They have white bodies with vertical black stripes and reach 3-4 inches in length. This is one of the most highly sought-after varieties of Plecos.

Also sometimes called the Bushynose Pleco, these fish are similar to the Common Pleco in appearance, but with the addition of bushy whiskers on the tip of the snout. There are multiple color morphs, including lemon and melanistic. They reach 3-5 inches in length, making them significantly smaller than the Common Pleco.

This variety of Pleco is similar in size and appearance to the Common Pleco, but they have a large sail-like dorsal fin. These Plecos can exceed a foot in length and are sometimes kept in ponds in warmer environments.

This adorable Pleco has a dark body, usually black, with white polka dots all over the body. They are moderately sized, often reaching over 5-6 inches in length.

These Plecos are similar in appearance to the Snowball Pleco, but they feature yellow or gold tips on the ends of the dorsal and tail fins, and this coloration often occurs on the pectoral fins as well. This is one of the more expensive varieties of Pleco you might see in a pet store. They can reach up to 10 inches in length.

The Royal Pleco is a white, cream, or grey Pleco with horizontal black or dark grey stripes. These stripes may run the full length of the body or may take on more complex patterns. Like the Common Pleco, the Royal Pleco can exceed a foot in length, and may reach upwards of 18 inches.

How to Take Care of Plecostomus

The size of aquarium you choose for your Pleco is dependent on the variety you have. Small Plecostomus can live in tanks as small as 10 gallons, while large Plecos require tanks starting at 75-100 gallons.

Most Plecostomus do best with a soft substrate that allows them to forage for food and rest comfortably on the bottom. Fine gravel or sand is a good option, as well as aquatic soil. They also appreciate rock formations and caves that allow for hiding and algae growth.

Plecostomus prefer densely planted tanks and usually will not eat live plants aside from algae and some tender, leafy plants. Java fern, Anubias, Amazon swords, and other plants with large leaves are great options because they allow for lots of algae growth.

A regular day/night cycle in your tank is a good idea but avoid bright lighting. Since Plecos are naturally nocturnal, they may be stressed by bright lights. Aim to keep daytime light at a low level, or at a moderate level with lots of hiding places. At night, provide lights-out or gentle blue lighting that won’t bother the fish.

Plecostomus produce a heavy bioload, so it’s important they are given adequate filtration that helps maintain water quality. Most prefer a moderate waterflow within the tank, but this varies depending on the variety of Pleco.

Plecos can be great additions to peaceful community tanks with plenty of space and hiding places. Without adequate plants, shelter, or space, they may become stressed and begin showing aggression toward other fish in the tank, especially other Plecos. They should also not be kept with fish that are prone to aggression and territoriality, like Cichlids.

It is generally recommended to avoid keeping Plecos with fish that have heavy slime coats since there has been some anecdotal evidence that they will suck off slime coat. This applies to goldfish, loaches, and even non-armored catfish. This behavior is less likely to be seen in Plecos that are well fed and kept in low-stress environments.

What to Feed Your Plecostomus

Many people make the mistake of not feeding their Pleco, assuming that algae growth within the tank will provide all the food it needs. Unfortunately, this often leads to starvation. Plecostomus need their diet supplemented with algae wafers and various types of bottom feeder and algae eater foods. If kept in a tank with fish that are faster and grab food first, it’s important to provide a safe space for your Pleco to get enough to eat without being harassed by tank mates.

They should be provided fresh veggies and fruits, especially leafy greens. Vegetables like romaine lettuce, spinach, arugula, zucchini, herbs like basil and cilantro, and broccoli can all be fed daily. Other fresh foods they enjoy as a treat include winter squashes, apples, bananas, cucumbers, peas, and carrots. Most Plecostomus will appreciate proteins regularly, like bloodworms and baby brine shrimp. They should also be provided driftwood, which is a staple part of the diet for many Plecos.

Creating a low-stress environment with high-quality nutrition is necessary for maintaining the health of your Plecostomus. Since they are armored, they are not as susceptible to some illnesses as many other fish. This includes things like ich and fungal infections. However, they are not immune to these illnesses.

The two main causes of poor health in Plecos is poor water quality and malnutrition. Ensure your water quality stays high by routinely checking your water parameters and performing water changes and tank cleaning and maintenance regularly. Malnutrition is often caused by the lack of knowledge surrounding the need that Plecos have for food outside of just algae within the tank.

In order to breed your Plecostomus, you will need to provide a breeding cave. The male will clean the cave, hoping to attract a female inside. If he succeeds, the female will enter the cave and lay her eggs on the side of the cave. The male then fertilizes the eggs and guards them until they hatch. It only takes a few days for the eggs to hatch, and then the male will no longer guard the fry.

It can be difficult to breed Plecostomus in captivity, especially in an amateur home aquarium. They are particular about the environment and prefer breeding caves that are as close as possible to the caves they would breed in in the wild. It’s also worth noting that breeding larger Plecos, like Common Plecos, can increase aggression. It is often recommended to breed Common Plecos in tanks that are 100-200 gallons.

Are Plecostomus Suitable For Your Aquarium?

Plecostomus can be excellent additions to many tanks, but it is important to know the needs of the Pleco you’re purchasing before you bring it home. If you purchase a Common Pleco that is 4 inches when you purchase it, you may be surprised when it continues to grow in excess of 10-12 inches. The most common mistake people make when it comes to Plecostomus is not understanding the variety of Pleco they have.

If you have a tropical or blackwater tank that is 10 gallons or larger, then there is a variety of Pleco that will suit your tank. If you are ready and able to meet the needs of a Pleco, you won’t regret adding one of these interesting fish to your aquarium. Their long lifespans, beautiful markings, and algae eating skills have all added to their popularity within the aquarium pet trade.

New Goldfish Supply List 2021: All the Gear & Things You Need to Know!