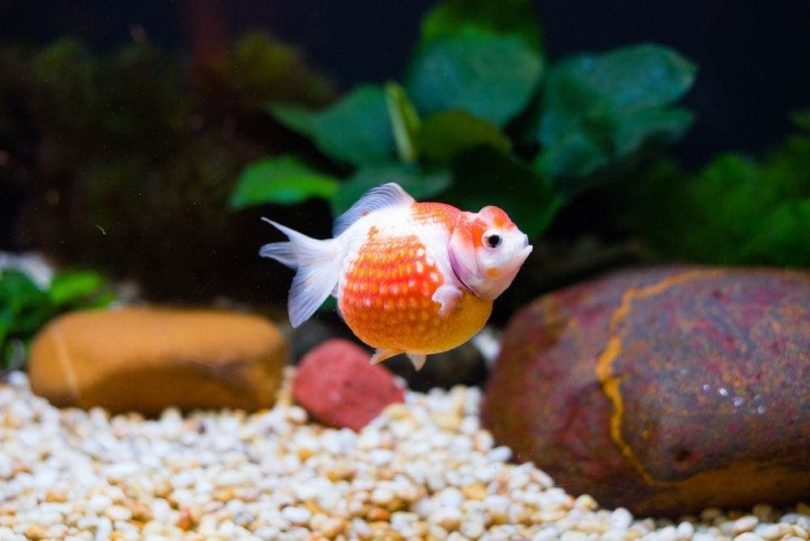 The Pearlscale goldfish, known being one of the most “well-rounded” types of goldfish, lends a personality to any tank.

Learn more about this unusual breed of goldfish!

The Pearlscale, a recently produced fancy breed, is estimated to have been developed around the turn of the 20th century in China and was brought to Japan in the late 1950’s, where further modifications were made to the breed.

Today in America, this breed is very popular and can be found widely in many chain and private pet stores. This fish is most easily identified by its deep, round belly and rows of small, hard, bead-shaped scales covering most of its body.

The scales of the fish are actually made of deposits of calcium carbonate, and on very large fish may get rather large.  This gives the fish a fantastical appearance and draws much attention to itself. They are the only goldfish to have these elevated scales, which are translucent or nacreous. This means that all Pearlscales are nacreous, and cannot be found in metallic!

They can, however, be found in many different color patterns and markings including calico (fairly common), red, white, black, blue, bi-color and most recently chocolate. As the fish matures, its body rounds more deeply and even begins to bulge to the sides. Their body is more round than any other breed of goldfish, and combined with the special scales, it has sometimes been called the golf ball goldfish!

Very young fish do not display this feature, but with age a definite distinction will be detectable between the chin and the tummy, which will continue to become more and more prominent as the stomach enlarges.

The Pearlscale breed has two head variations: the crowned (or hooded) and the wenned. The Crown Pearlscale variant looks identical to the regular one, but with a “bubble” on top of its head that may be single or split down the middle. It is also called the high-head goldfish or Hama Nishiki.

The wenned variety may have a small hood like a Lionhead goldfish or a large Oranda-like wen. Not all Pearlscales have head features – indeed, most have no head feature at all.  Finnage does not vary widely among this breed of goldfish, but there are some kinds that have more of a longer fringetail than most. This is pretty uncommon. Recently, Pearlscales have been bred with telescope eyes as well (known as Demekin).

Is my Goldfish a Pearlscale?

Very young Pearlscales can be mistaken for Fantail goldfish when they have not developed much of a belly and their scales are still small and hard to see. They become distinguishable from them the older they get, so as with many other goldfish breeds, only time will tell.

If your fish is younger, look closely for the presence of little “pearls” and a rounder body shape seen by the head. Looking at a photo of one can also help determine if your goldfish is a Pearlscale or not.

How to Take Care of Your Pearlscale Properly

Owners sometimes worry whether they are feeding their fish too much food when they observe their pet’s bulging belly, but such developments are not caused by eating too much. They are genetic, and will happen to Pearlscales regardless of their diet. This makes swimming more difficult for them than for other fancy goldfish, and should be taken into consideration when selecting friends for it. They are not any more gluttonous than other goldfish species.

The special scales of these fish can get knocked off by sharp objects in the tank or by the fish scratching on objects during an ammonia surge. Be warned that the scale will grow back, but only as a regular scale and never again as an elevated one.

Keeping the water quality under control can help to prevent your goldfish from dashing themselves against things out of irritation and keep their scales on!

Pearlscales are relatively hardy and are able to withstand colder temperatures. This makes them a candidate for pond life, but one would also will do quite well in tanks of 20 gallons or larger. This fish can reach the size of an orange and be just as round as one, too!  Be sure to avoid putting decorations in the tank that are sharp…

You don’t want the beautiful scales of your fish to get damaged! Keep in mind that the older the fish gets, the more space it will need to move through the plants in the tank and remember that it will probably set lower in the water as well when decorating the tank.

Pearlscales are some of the most peaceable goldfish. I have owned my share of them, and can say from personal experience that I have never seen them show any signs of aggression to other fish (there are always exceptions I’m sure, though!). Their good-natured personality makes them great community fish.  They are full of personality and fun.

The gentle nature of the Pearlscale goldfish makes it vulnerable to getting picked on by more aggressive breeds, such as the Ryukin.

It’s slow swimming makes it even more of a candidate for this.  In this light, choosing more slower-moving and docile breeds is a good idea.

Bubble eyes,  Telescope eyes like Black Moors, Veiltails and in some cases Lionheads are all suitable companions.

What to Feed Your Pearlscale Goldfish

One thing to watch out for with owning a Pearlscale is what you feed it. Because of their wide load, they require a diet that is varied and includes vegetables to prevent them from having Swim Bladder Disease.

They are prone to issues with this organ as they age and their stomach swells. They will appreciate live foods, peas, sinking pellets and occasional flake foods (not too many!).

Overfeeding can result in digestion issues, a persistent problem with their compact intestinal track.

Now Let’s Hear it From You

Have you ever owned a Pearlscale goldfish? What was your experience? Leave your comment below – I love hearing from my readers about their pets!

Why Is My Goldfish Swimming Upside Down?