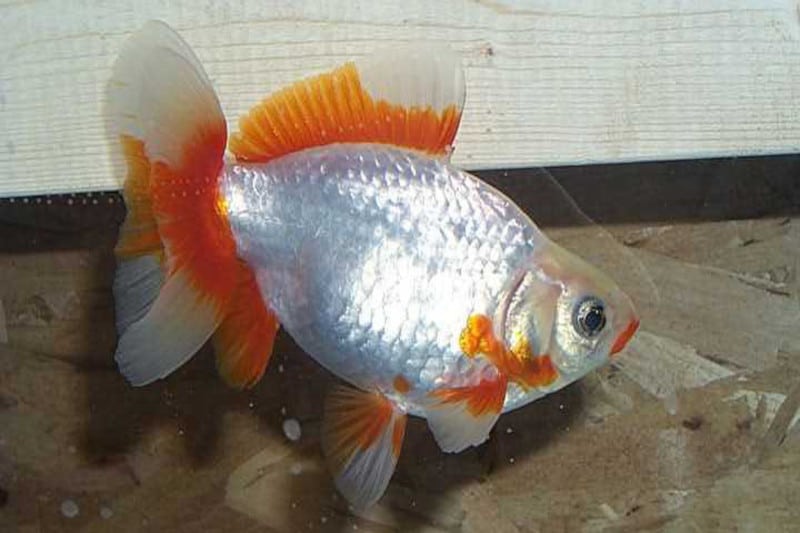 A rare and beautiful creature, the jikin is often highly sought-after by goldfish enthusiasts, and exemplary specimens can be sold for large sums of money.

Like most goldfish, they aren’t complicated to look after, but they do need plenty of space to keep them in tip-top condition, physically and mentally.

Let’s get the lowdown on all things jikin, including their appearance, size, lifespan and any special needs for keeping them in a home aquarium.

While jikin are classed as fancy goldfish, they have long, slender bodies that aren’t too dissimilar from those of single-tailed varieties, such as commons and comets.

Their main distinguishing feature is their uniquely beautiful tail which earns them the nickname “peacock tail.”

The divided caudal fin is deeply forked with four lobes in total – all of equal sizes – making it look like an “x” or a four-leaf clover when viewed from the rear.

Even when bred selectively, only about a quarter have the correct tail, and even less have the right coloring, so you can see why they’re so rare.

Red on the gill plates is also quite common, and most jikin are likely to have errant red scales or patches elsewhere on their bodies.

Since the true twelve reds pattern is extremely hard to achieve, even through selective breeding, in Japan it has traditionally been common to remove red scales from other parts of the body. This, however, is cruel and can be harmful to the fish, so avoid buying any that have had this done to them.

Luckily, it doesn’t seem to be a practice that’s gained traction in the United States or the United Kingdom.

How Big is a Fully Grown Adult Jikin Goldfish?

Jikin aren’t the largest of fancy goldfish, but they aren’t the smallest, either.

In the right habitat, they can reach up to 9 inches long. However, in an average-sized aquarium, they’re more likely to grow to 5 or 6 inches.

That said, you shouldn’t bet on them not growing to their maximum size, so be sure to give them enough room to swim.

How Old Can Jikin Goldfish Live?

You’ve probably heard of someone who won a goldfish at a fairground, brought it home, and only had it live for a week or two. Well, that’s just because it wasn’t looked after properly; they can and do live well into the double digits.

Jikin bought from a reputable source and cared for correctly live for an average of 15 years, but they can live longer – up to 25 years – in some cases.

If you go way back to the beginning, all goldfish descended from the Chinese Crucian carp, which have been kept in ponds in China since the 9th century and developed into a distinct species around the 13th century.

Jikin, more specifically, have been selectively bred from the wakin to create a new type and were developed in the Nagoya area of Japan.

Since they were originally bred to be kept in ponds, their markings are best viewed from above.

Easy to Keep in an Aquarium?

Like most goldfish, jikin are hardy fish and are therefore relatively easy to keep in a home aquarium. However, we would like to add they aren’t necessarily the perfect starter fish that many people state them to be.

While they don’t require much special attention beyond feeding and keeping their environment clean, they do need large tanks, good filters and frequent water changes, as they produce a lot of waste.

They also have a long lifespan, so you must be willing to commit to potentially 20+ years of caring for them.

What Should You Feed Them?

They are omnivores and aren’t picky when it comes to food, but they need to be fed a good mixture of both plant and animal foods to thrive.

A good place to start is with a high-quality flake or pellet food designed for goldfish. Don’t skimp on these, as lesser brands don’t provide much in the way of nutrition.

Strange but true: They don’t have stomachs. Therefore, you should feed them a few small meals a day, instead of one large one, and soak dry pellets before feeding to avoid digestion and buoyancy problems.

Their aquarium is their home and all they’ll ever know, so it’s essential to get the set-up right, both to keep them in good health and to provide an enriching environment.

It’s worth noting they will also happily live in ponds. In fact, they thrive in ponds, as this gives them plentiful room to swim in and space to grow.

The minimum required tank size for fancy goldfish is 30 gallons for one, then an additional 10 gallons for each additional one you plan to keep. So, if you want to house three jikin, you’ll need a tank of at least 50 gallons.

This, however, is the bare minimum, and we’d always recommend getting the largest aquarium you can afford and have room for.

Jikin grow larger than many other types of fancy goldfish, so bigger is better! It’s false economy to start out with a small tank if you’ll only have to size up when you realize your fish have outgrown it.

In terms of shape, opt for a tank longer than it is tall, this provides more surface area for better oxygenation of the water, plus it gives more horizontal space for swimming.

Must they have a Filter?

If anyone tries to tell you goldfish don’t need filters in their tanks, don’t believe them.

They produce a lot of waste, so a decent filtration system is a must. The type of filter isn’t important – as long as it’s good quality – just make sure it’s of appropriate capacity for the aquarium you have.

If in doubt, size up. It’s better to have a filter that can tackle a larger tank than the one you have, rather than a filter which is designed for a smaller aquarium.

You can learn more in our article: ‘do goldfish need filters?‘

Substrate isn’t a must-have for jikin, but we do think it provides a nicer environment than a bare-bottomed tank. Not only do they like to forage for fallen food among the substrate, it’s also where a lot of beneficial bacteria live, which are important for a healthy tank.

Opt for a smooth gravel substrate large enough that they can’t swallow it.

It’s essential for all goldfish to have both light and darkness in their tank, and to establish a proper day-night cycle.

If you keep your jikin in a room with lots of natural light, it may not be necessary to have artificial aquarium lighting, but many owners like to light their tanks anyway, as it helps bring out the colors of their fish and makes the tank look more interesting at night.

If you do choose to light your tank artificially, you’ll need a bulb that provides 1 to 2 watts per gallon of water. Leave the light on for 12 to 16 hours per day, and keep it off for 8 to 12 hours per day, to mimic a natural pattern of day and night.

However, those relying on natural light should remember to keep their jikin’s aquarium out of direct sunlight, as this can increase algae growth and raise the water temperature, making it uncomfortable for your fish.

They thrive in water that’s kept between 65 and 78 degrees Fahrenheit but can tolerate temperatures close to freezing. This means you’re unlikely to need a heater unless you want to keep your tank at a consistent temperature.

As a rule, it’s best to keep them with other fancy varieties. Avoid pairing them with faster single-tailed varieties – such as common goldfish and the calico colored shubunkin – as they’re likely to out-compete a jikin for food.

While some people have had luck keeping them in the same tank as peaceful freshwater tropical fish that require temperatures below 78 degrees Fahrenheit, we’d advise against it. Other goldfish have similar requirements, making them the best choice of tank mate.

Video: A Look at the Jikin Goldfish

Here’s your chance to see what jikin are all about. The following video features five of these fish and shows their beautiful markings and unique tails.

Due to their rarity and high cost, jikin aren’t the right goldfish for everyone, but they are striking fish. Since they have long bodies and no protruding eyes or other deformities common among fancy goldfish, they tend to be healthy and hardy.

As long as you can provide them with adequate space, jikin are low-maintenance fish that could be with you for decades to come.