How to Grow Aquarium Plants, Planning, Setup and Supplies.

Knowing how to grow aquarium plants can make all the difference for people trying to set up certain types of aquariums. Really, it's all about making sure that the environmental conditions are right and that people have set up the balance of the plants correctly. People need to have the right equipment and they need to be careful about planning the finished aquarium correctly. 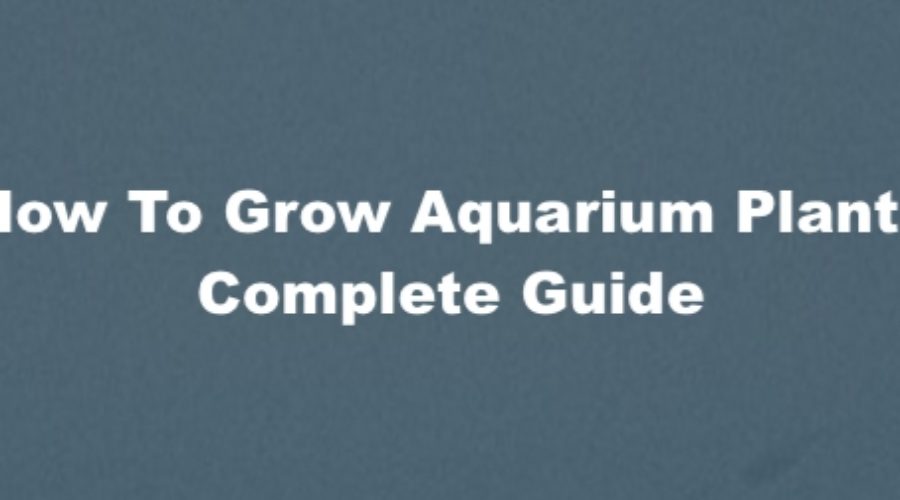 An aquarium is a miniature habitat with all that implies and people really need to treat it as such. People should also have a sense of the timetable when it comes to growing out their aquarium plants. From there, raising the plants for an aquarium should be relatively straightforward.

A planted aquarium should have plenty of additional features for the sake of symmetry and balance. Planning out where all of the plants are going to go is more important in an aquarium than it is in a garden. Gardens have more space so people don’t have to economize on the space as much.

Setting Up the Plants

The planting aquariums are going to need a substrate that will serve as a medium for the stem plants that people will set up at this preliminary growth step. People should push the stems into the substrate by about an inch or two. There are lots of prepared substrates on the market (like this one which we recommend) especially in gardening centers or pet shops that should give people the results that they want for their aquariums.

The plants for aquariums are usually going to arrive in the form of stem plants when people first purchase them. The fragile stem plants are usually grouped together in a wire base which will have to be carefully removed in order to keep them in good condition. At that point, people can start setting up the stem plants according to the established plan. Many will set up the tall stems in the corners of the tank and the short stems in the center but there are many different arrangements that can work for those trying to create the most aesthetically pleasing tank.

When the stems of the plants are set up in the substrate they should be in the process of starting their root systems. Once the root systems become established in the soil the plants will start growing faster and faster. A large part of growing aquarium plants is knowing how to give them the proper setup and support. From there the plants will be able to grow on their own.

Coral is also a nice addition to any aquarium, we have covered a separate post on LPS coral here.

One of the most important pieces of equipment that people are going to need is a strong aquarium light. People fortunately aren’t going to have to rely on sunlight for the sake of their planting aquariums. Aquarium lights are going to give plants everything they need for photosynthesis. The indirect sunlight that plants get from windows typically won’t suffice anyway and the aquarium lights that people purchase will provide all of the exposure they need in order to grow.

People are also going to need fertilizer (we have reviewed our top 6 picks here) to make sure their new plants in the planting aquarium get the nourishment they need. This is particularly important in the earlier stages of the plant development process. Plants need much more nourishment in the growth phase. These stemmed plants that people have for their aquariums are going to be particularly vulnerable when they are planted in the early days of their lives. However, with the right nourishing plant fertilizers and substrates people can easily get their plants back to a healthy state.

One of the biggest threats to plants at this stage will be algae. Algae send out spores that people are not going to be able to see with the naked eye so it is important to see if a given aquarium has any signs of an algal infestation. A protein skimmer also helps keeping your aquarium clean.

Sometimes, when aquarium plants don’t really take root it’s not the fault of the person who started the aquarium. It might just be a function of the plants not being all that healthy to begin with which isn’t always something that you can control. The planted aquarium plants need to have healthy white roots from the beginning and they need to have an overall fresh and sturdy appearance. People should avoid purchasing stem plants that don’t appear healthy at the outset since they are not going to be able to restore them to a healthy state even with careful dedication.

Some are just going to leave their planting aquariums like this when they set them up and others are going to want to add to them as they grow. Either way, if they follow the right steps and take the right precautions they should get the plants they desire.

Don’t forget it’s always important to clean your plants occasionally, here is a guide on how to do that.