Fantail Goldfish are a fancy variant, but their hardy natures and low maintenance needs mean they are relatively easy to keep and enjoy.

This makes them a great first step into fancy goldfish keeping for beginners and a very popular and commonly seen variety.

In this guide, we take a detailed look at the fantail goldfish. We start with their breed profile and table of theie most important care considerations, before moving onto some interesting facts and tank mate compatibility.

So let’s cracking with our look at this hardy, beautiful and popular fish.

Their most striking characteristics are its double tail and ovular, egg-shaped body – quite different to the streamlined look of the Commons and Comets.

In China, where the Fantail was likely bred, it’s commonly referred to as the “lettered fish” as it looks like the Chinese character “wen”.

The unique double tail is completely split in the best specimens and forked by at least 75%, giving it a triangular appearance when viewed from the rear.

Although they aren’t as common in the UK, according to Bristol Aquarists, they are readily available in the US both online and in stores for an inexpensive price. They are one of the more commonly seen of all goldfish types in the US.

Although they come predominantly in red or calico shades, they are also available in orange, yellow, white, olive, yellow-brown and black.

There are three different types of scale pattern for Fantails – either a red-orange metallic, a speckled nacreous or a lighter matte. Regardless, the scales should always be regular and complete.

There is a Japanese version of the Fantail – the Ryukin Goldfish – which has a wider tail and more highly curved rear than the original variety.

How Big do Fantail Goldfish Get? – Average and Maximum Length

Their average length is 6 inches although if well looked after, in optimum conditions, they can grow to between 10 and 12 inches.

Have you ever seen a foot long fantail? They are a sight to behold!

How Many Years do They Live?

Their average lifespan is anything between 10 and 15 years although as is common across many Goldfish variants, there is nothing to stop them living for over 20 years if their environment is kept safe and well maintained.

Sadly they only tend to live a few short years due to being kept in sub-optimal conditions.

The American Goldfish Association theorize that they are a natural mutation bred in China and probably the first successfully bred double-tailed fish from which all modern fancy varieties are descended.

The original Fantail was first seen during the Ming Dynasty in China, dating back to the 1400s.

They are easy to keep in a home aquarium and certainly suitable for the beginner fish keeper.

Their hardy nature and relative ease of which they are kept and cared for mean that they are the natural first progression into keeping fancy varieties.

Fantails with metallic scales are reportedly the most durable variant. 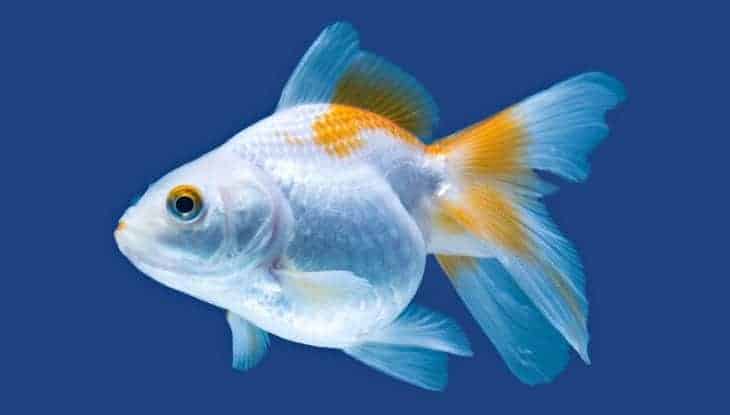 Fantails are an easy to care for fish, and there are no special considerations when compared to caring for goldfish in general. Follow the advice below on their tank setup and feeding, and you can’t go far wrong.

How and What to Feed Them

They are omnivorous and should eat a varied and balanced diet of fresh, frozen and flake produce.

Animal World recommend you should pair a quality flake food given a few times a day with occasional treats in the form of brine shrimp, Daphnia, tubifex worms or blood worms. Vegetable food should also form a small portion of their diet.

Freeze dried foods are preferable to live food as they will not be affected by any parasites or bacteria.

The key to happy and healthy Fantails is to start with a properly set up and equipped aquarium. A safe and hospitable environment is key to ensure they thrive and live long, happy lives.

The absolute bare minimum tank size for one Fantail is 20 gallons but we would recommend at least 30 gallons for the first fish, with an additional 10 gallons for every extra one you add.

Goldfish are known for producing a lot of waste so the more water in the tank, the more diluted the waste and the healthier your fish will be.

If possible, always buy tanks that are long, wide and shallow as they provide the maximum amount of surface area and therefore oxygen for your fish to survive. Tanks shaped like these also provide more room for swimming side by side.

If you are stuck with a round tank, make sure that you don’t full it right to the brim with water to maximise the amount of surface area.

Do they Need a Filter?

A good filter in your tank will combat the excess waste created and ensure they can thrive. A good filter will filter at least six times every hour the volume of water in the tank.

Gravel substrate isn’t a compulsory purchase but is beneficial in transforming your tank into a natural and welcoming environment.

Goldfish are natural foragers and the substrate will allow them to show these natural behaviors. Substrate is also a nice way to add character to your tank.

Goldfish benefit from a day to night cycle when it comes to regulating their bodies ­– although natural light can provide a little of this, artificial lighting in your aquarium will also bring out the rich colors of your Fantails while illuminating the tank.

They are notable for being one of the hardiest variants and are very tolerant of low temperatures – even just a few degrees above freezing! You should be mindful of keeping temperature consistent, however, as swift drops can end in a fatality!

Optimum temperatures are between 65 to 72 degrees Fahrenheit – you may want to purchase a quality aquarium heater if you live in a colder climate.

Check the video below to see these beautiful fish in action, swimming around in a 55-gallon tank.

They will thrive best when living in a community, so you should keep them in a shoal of at least three. The most important thing is to ensure the tank is large enough for the number of fish residing there – if not, size could be stunted and other health problems prompted.

Being a fancy variety, they can be kept with similar variants such as Black Moors and Orandas. They should be kept separate from very slow swimmers though as they will nip on them and even eat all of their food.

They can also co-exist with longer, single-tailed types like the Common and Shubunkin variants as they are very hardy, able to swim well and readily compete for food.

As far as other fish species go, Fantails will thrive as long as they don’t have aggressively territorial tank mates. The Chinese Blue bitterling and the Northern Redbelly Dace make good tank mates.

Shrimps, crabs, and snails are safe to include in their tank but the only frogs you should keep them with are African Dwarf Frogs, as they’re small, docile and fully aquatic. Fantails may eat and uproot aquatic plants so opt for artificial silk plants if you’re set on including them in your aquarium.