Do Koi Fish Eat Other Fish? Everything You Need to Know! 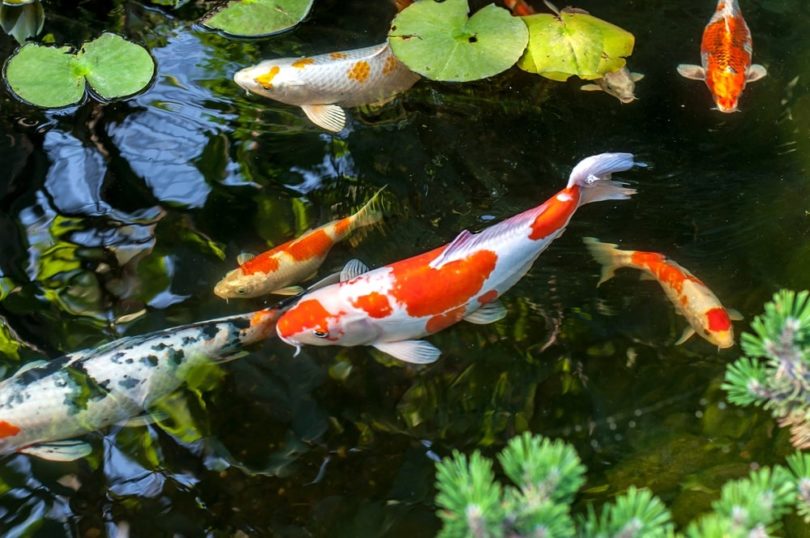 Koi fish make beautiful additions to ponds of just about any size. They swim with fluid-like movements and bring plenty of color to ponds. Have you ever wondered if you could keep other fish in a pond with Koi, though? After all, they’re easily one of the most popular pond fish, if not the most popular pond fish. They probably didn’t earn that title by being difficult to keep with other fish, right? Here are the things you need to know about keeping other fish with Koi fish.

Do Koi Fish Eat Other Fish?

Koi are omnivores and although typically considered gentle, they are opportunistic eaters. Like their cousin the goldfish, Koi are known to eat just about anything they can fit into their mouth. In fact, they’re even known to attempt to eat non-food items, like rocks. If you keep Koi with pond mates that are small enough to fit in their mouth, then they’ll probably get eaten unless they have tons of hiding spots available.

Not only will Koi eat their tank mates, but they will even cannibalize their own fry. It can be difficult to breed Koi fish in a pond setting without intervention because they will usually eat the fry. If they grow beyond the hatchling stage, they are still at risk of being eaten by the larger fish in the pond.

What You Should Know About Koi Fish Behavior

So, here’s the other big thing you need to know about Koi fish behavior in relation to other fish. Koi are known to be bullies. They are fin nippers and tend to be a little more aggressive than the typically docile goldfish. Koi are even known to bully other fish to extreme stress or death. This behavior may be related to curiosity or boredom and is unlikely to be related to overt aggression. Overall, Koi are generally nice fish, but they aren’t particularly gentle fish.

What Fish Can Live with Koi Fish?

In a large enough pond, goldfish may be able to bekept with Koi. However, it seems like the bullying behavior exhibited by Koi is frequently taken out on goldfish. This may be because they are often kept together, or it may be related to territories or breeding. Goldfish and Koi can interbreed, and since Koi fish are often so much larger than goldfish, their breeding behavior may be too dangerous or stressful for goldfish. Other varieties of carp besides goldfish also may make good pond mates for Koi.

Another option for fish to keep with your Koi fish is bottom feeding catfish that prefer the same water parameters that Koi need. Bottom feeders are unlikely to become the target of Koi bullying since they often stay out of sight and rarely leave the lowest portions of the water column. Catfish tend to be hardier than some other types of bottom feeders, making them well-suited to any overly curious Koi they may encounter.

Other pond or river dwelling fish can be good additions, especially in large ponds. Fish like perch and bass often closely match Koi fish in size, at least enough to deter bullying from the Koi. Aim to keep Koi with fish that can safely overwinter with them in the pond environment, so you aren’t stuck trying to catch half the fish in the pond.

Some fish just aren’t going to be a good match for your Koi pond. Rosy red minnows, Ricefish, and Mosquitofish are all popular small fish for ponds. However, these fish would be little more than a snack to an adult Koi fish! Aim to keep large pond mates with your Koi fish. To live with Koi, they should not only be large, but also able to withstand any bullying advances by the Koi. Under most circumstances, Koi fish are best kept alone to prevent any behavioral problems or the accidental or opportunistic eating of pond mates.