Betta Flaring: Why Betta Fish Flare, and Is It Bad for Them? 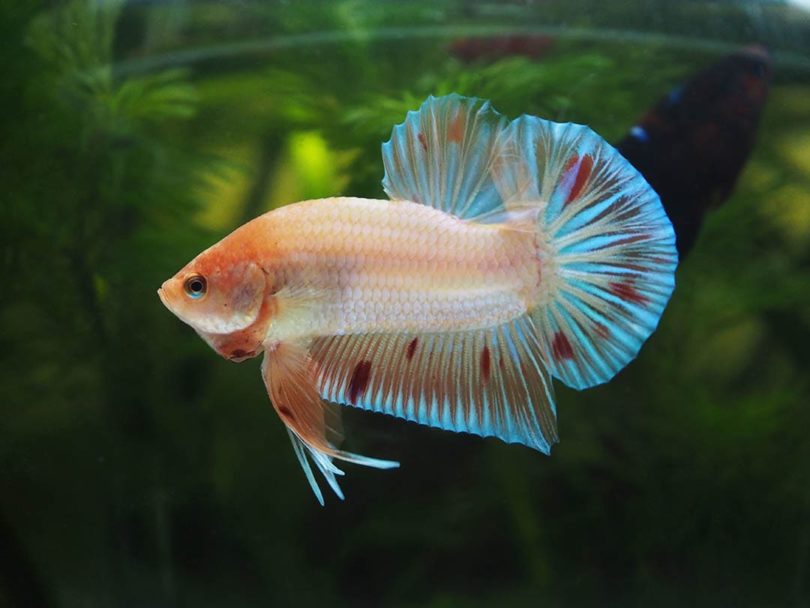 Siamese Fighting Fish or Bettas have a unique trait that took them out of the rice paddies and into aquariums. Wild Bettas are different from the fish that you see in pet stores. They lack the elaborate fins and coloration. Domesticated fish are selectively bred for the varieties that would only attract unwanted attention in the wild.

Despite the genetic roulette, all male Bettas share the singular trait of flaring. It’s an elaborate display of fanning their fins, fluttering their gills, and puffing up their bodies. It’s quite the spectacle to witness. Aggressive behavior isn’t unusual in the animal kingdom. But the Betta’s story is different.

The native habitat of the Betta is southeastern Asia, where it lives in marshes, swamps, and ponds. The name is something of a misnomer. Betta is the name of the genus, of which there are 75 species. The fish that we know by this name is Betta splendens, or its Thai common name, Pla Kud.

Scientists don’t know much about its history. However, it’s generally believed to have been domesticated for at least 1,000 years. It seems that people have enjoying watching the Betta’s aggressive behavior for centuries. Its popularity has fueled a market for this species as both a fighter and an ornamental fish. Selective breeding continues for each purpose.

Just watching a male Betta is enough to associate its behavior with aggression. Females also flare but not to the same degree. The flaring makes each combatant look larger and thus, the more formidable threat. It’s an excellent way to protect one’s food and territory.

Flaring serves an evolutionary purpose too. If one fish backs down, the ruse worked. The victor won the territory or whatever was at stake, with minimal physical cost. The loser also triumphs because it avoided injury and an increased risk of disease or death.

You may wonder why a Betta might flare if the two fish aren’t in the same tank. Evolution hasn’t removed this behavior from its repertoire, putting instinct in charge when two males see one another. The other fighter can even be the Betta’s own reflection!

Flaring also occurs as part of courtship and mating behavior. Males do it for the same reasons of looking bigger and stronger. The motivation is different, though. Its purpose is to make one fish stand out as the better or more fit mate. It’s not unlike a peacock or turkey fanning its feathers.

The Physiology of Flaring

Scientists have studied flaring for decades to determine why it occurs. Even Charles Darwin pondered the question. A likely explanation is that it’s related to sex-specific hormones. Female Bettas often have a small amount of the male sex hormone, androgen, which can explain why they will also flare sometimes.

A study published in the journal “PLoS Genetics” revealed fascinating evidence behind flaring behavior. The researchers observed that two fighting males reach a point where their actions become synchronized. Genetic analysis showed similarly enriched genes. It could reflect the consequences of selective breeding. However, it opens a new path of investigation.

Other research delved into the sex-specific hormone theory. Scientists exposed male Bettas to antiandrogen drugs. These increased bold behavior, regardless of the dose. This evidence suggests that something else is going on to trigger flaring.

The answer may lie with another mechanism to explain this aggressive behavior. Researchers looked at a different hormone called serotonin. This chemical activates in the brain and other parts of the body, including the digestive system. It also plays a role in both mood and sexual function.

The scientists administered a drug that would ultimately lead to higher levels of serotonin in male Bettas. They found that the fish exhibited less aggressive behavior, suggesting some kind of innate biological control over flaring. Interestingly, a similar response was found in female Bettas too.

While the jury is still out regarding the physiological reasons behind flaring, we still may wonder whether it’s good or bad. It does serve beneficial purposes if it increases the chances of survival of the male Betta. Therefore, on the surface, we can conclude that flaring isn’t a negative thing.

However, that doesn’t mean flaring is always positive. It takes a great deal of energy to perform this display. So, it can increase the fish’s stress level and make it more vulnerable to disease. There’s also the risk of injury if two males are flaring at each other. While Bettas don’t always die fighting, infections are possible complications of a battle.

Flaring is normal behavior between both male and female Bettas. Selective breeding has fostered it and produced specimens that last longer in the proverbial ring, with markedly high levels of aggression. However, the fact remains that encouraging flaring for sport is inhumane. It serves no purpose for either fish unless it’s about defense or courtship.