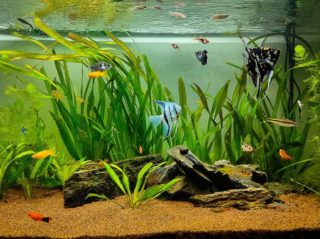 The Platy is often the first fish beginners in the hobby get. It has a lot going for it to earn this distinction. It is hardy and tolerant. This species is about as peaceful as they come, which gives you an excellent starting point for finding tank mates. As a slow-moving fish, it fits the ideal notion that many have of an aquarium.

If you want a tank filled with peaceful fishes to enjoy the benefits of gazing at it, the Platy is a good place to start. It can set the right tone for your aquarium for creating a serene environment. The species’ temperament also offers you many options for planning the living color scheme of your tank.

The Angelfish is appropriately named because that describes its nature. Even though it’s a larger species, it is slow-moving and not aggressive. It has the same needs for tank mates as the Platy has, which puts them on a level playing field. The coloration of this fish will provide an excellent backdrop to the bright colors of the Platy.

The betta or Siamese Fighting Fish can make a compatible tank mate for many species. While it’s territorial, its aggression is usually confined to males of its kind. It lives in similar habitat as the Platy, making it easy to set up a tank that will make both of them happy. They typically feed at the top of the aquarium, which can reduce conflicts over food.

The Swordtail lives in similar areas as the Platy, which sets the stage for compatibility between the two species. Their preferences for water flow vary with their life stage. It also likes a tank with lots of plants. Like the Platy, it isn’t a picky eater, either. Supplementing it with protein sources, such as bloodworms, will ensure it meets its nutritional needs.

The name of the Fancy Guppy says it all. It’s is a gorgeous fish, thanks to its long fins that allow it to glide in the water. Like other species on our list, it lives in the same places as the Platy with similar water conditions. It is also a live-bearing fish. It likes a well-planted tank, with plenty of cover. The Fancy Guppy likes the same water conditions, making it a go-to tank mate.

The dark color of the Black Molly makes a striking contrast to the bright orange of the Platy. It makes both species noticeable. It ticks off all the boxes for similar water conditions that go a long way to ensuring compatibility. It is an omnivore that will eat whatever you offer it. The Black Molly is a live-bearing fish, too.

The Neon Tetra inhabits the waters of South America, which have similar living conditions. It also prefers slow-moving waters, which makes sense for a smaller prey species. It typically lives in places with lots of floating plants that provide sufficient cover to help it evade predators. You’ll likely only find captive-bred fish, which are more tolerant than their wild counterparts.

The Corydoras Catfish is a suitable addition to any tank with peaceful fish. It minds its own business, taking care of the algae and detritus on the bottom of the aquarium. Slow-moving waters are ideal for this fish so that it can feed undisturbed by strong currents. This species does best in small schools of others of its kind, although it’s not aggressive.

The Zebra Danio makes an excellent companion fish in a tank with others of a similar temperament. While its name is something of a misnomer, it doesn’t detract from the peaceful nature of this schooling fish. Unlike many other species on our list, this one hails from Asia yet lives in like conditions. Like Platies, you’re more likely to find captive fish than wild-caught ones.

The Glowlight Tetra is another easy fish to raise. It isn’t a fussy eater that will keep to itself and not bother any of its tank mates. It’s an attractive fish, with its pearly white color. They prefer larger groups than many schooling species. It lives in South America in the wild in slower-moving water like many of the fish on our list.

The Dwarf Gourami stands out from other fish in our round-up because it is a labyrinth species. That means it can breathe atmospheric oxygen at the surface of your tank. It is another Asian fish that lives in similar water conditions as the South American Platy. It prefers a well-stocked tank with plants and hiding places to keep it feeling secure in its home.

What Makes a Good Tank Mate for Platy?

A peaceful temperament is the number one requirement for living with a Platy. Size is another factor since this fish isn’t very fast. Of course, the fry are fair game unless you remove them, being a live-bearing species. Schooling fish also make good tank mates because they will keep to themselves and are less likely to cause trouble.

Where Do Platy Prefer to Live in the Aquarium?

The Platy doesn’t have a preference for where it hangs out in the tank. It will explore its surroundings, top to bottom. Since it eats plants, it will swim to plants wherever you put them in the aquarium. That makes the area where it lives less of a factor than it can be, with species that stay in one spot in the tank.

The Platy lives in Central and South America, depending on the species. It prefers warmer waters in the 70°F–77°F range. It does best in neutral to slightly alkaline pH conditions. In the wild, the species lives in inland wetlands and flooded pastures where the waters are slow-moving and well-stocked with plants. It is a hardy fish that can tolerant hard water.

The Platy isn’t a large fish, only getting up to 2 inches long in the right conditions. Of course, good nutrition is a vital factor that helps determine its adult size. That trait also comes into play when considering which species are compatible with it. That’s why it’s essential to keep it with fish of a similar length to prevent predation.

You couldn’t find a more docile fish than the Platy. It doesn’t have an aggressive bone in its body, even during breeding. Its temperament, combined with its easy care, makes it an ideal species for beginners to the hobby. It isn’t a schooling fish like tetras, although it likes the company of its own kind in small groups of like-minded animals.

4 Benefits of Having Tank Mates for Platy in Your Aquarium

1. The Platy Is an Ideal Fish for Children.

The Platy has a lot going for it as a first pet for children. Its care is easy-peasy. It is a prolific breeder that will offer plenty of opportunities for biology lessons.

2. The Platy Gets Along With A Lot of Species.

The Platy makes it easy to populate a tank because it gets along with so many species! You probably surmised as you’ve read our list.

3. The Platy Is Tolerant of Less Than Ideal Conditions.

This factor is essential for beginners. It’s frustrating to lose fish, which makes tolerant one desirable for kids, too.

Many species make feeding and keeping them healthy a challenge, especially with live-caught fish. That isn’t the case with the Platy. It breeds quickly in captive conditions, making it affordable and readily available.

The Platy has so much going for it on so many scores. It’s easy to take care of, which makes it an ideal pet for children and beginners to the hobby. It’s hardy so that you can ease into keeping an aquarium without a lot of risk. If you want to breed your Platies, you’re in luck. This fish will make it simple without a lot of effort on your part, either. Just provide the right conditions, and you’re set to go!

As if that weren’t enough, you’ll have no problem finding them at big-box retailers. They are also affordable, which is the icing on the cake.