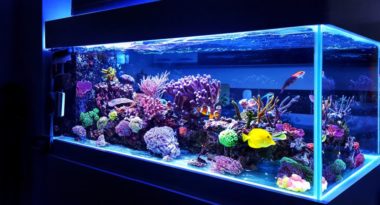 If you have a reef tank, a pond, or really any kind of aquarium, you might be interested in GFO. The problem we are looking to address today is that of algae. Algae plague many aquarium owners, especially those with reef tanks and with outdoor ponds. When algae bloom, it can make quite an unsightly mess.

It just does not look nice, it is hard to clean, and it ends up suffocating the life right out of the tank. GFO is a great solution that helps to cut back on and kill algae. So, today we are here to find out what is the best GFO for a reef tank (this is our top pick).

A Quick Comparison of our Favorites

Let’s get right into it and take a look at our personal pick for the best GFO for reef tanks. In more ways than one, this particular option is considered to be a good choice by many.

With this option from Kolar Filtration, you get a full 1 pound bag of phosphate removing GFO pellets. One thing to keep in mind here is that although we are talking about reef aquariums here, Kolar Filtration GFO can be used for saltwater, freshwater, reef tanks, and ponds alike. It seems to be quite a versatile option.

It is made in the USA, which does usually ensures a high level of quality. The manufacturing standards for this stuff are quite high and it is safe to use in all tanks. It will absolutely not hurt any of your fish, which is a pretty big deal no doubt. This particular granular ferric oxide is best used in a GFO reactor, but it can also be placed in media bags in your normal filter.

Another thing to keep in mind here is that you do need to wash this stuff, just rinse it off before using it. If there is one thing that we can say about this option, it is that most people agree that it works really well to remove phosphates from aquarium water. In terms of stopping algae in its tracks, this is our personal favorite and effective option right now.

The best part in our opinion is that it is specially designed to quickly absorb and bond with phosphates. It is said to work faster and last longer than most other options.

Just like our own first pick, this particular option is best used in a GFO reactor, but it can also be put in a media bag and placed in your normal reef filtration unit. This stuff is quite high quality, maybe not quite as good as our first pick, but it gets the job done anyway.

This granular ferric oxide works pretty well to bond with and removes lots of phosphates from the water, thus stopping and containing algae blooms. The pellets are fairly large, which is good because they won’t slip out of the filtration unit and cloud up the water.

However, the large size of these granules does mean that it is not quite as effective at its job as some smaller granules.

This is quite a unique option to go with. Right off the bat, what needs to be mentioned here is that ROWAphos Removal Media is specially designed to be used in a fluidized GFO reactor. While it can be used in a filter bag and placed in a normal filtration unit, this is not recommended as it will not work as well as it otherwise would.

This option is advertised as possessing a very high binding capacity, which means that it removes a higher amount of phosphates from the water than other options of the same size.

Another cool part here is that ROWAphos Media is very long-lasting, and not only that, but you can leave it in your aquarium for as long as you want and it will never release phosphates back into the water. Most people would agree that this is quite a beneficial feature.

It’s totally safe to use for reef aquariums, it is not non-toxic in every way, and it does not even influence the pH level of the water either. What is also beneficial is that this stuff does not require very much room, and being a space-saver is always convenient in this kind of situation.

This is a pretty effective yet basic option to go with. Here you get a 1 pound container, but it does also come in other sizes. It is advertised as being minimalistic because a small amount of this stuff is quite powerful, so you should not need too much of it. TL Reefs GFO is said to be fast-acting.

It will begin working the second you insert it into your aquarium. It is also quite long-lasting. Also, the bonding of phosphate to this stuff is permanent, so it will never leach the phosphates back into the water.

In terms of killing and controlling algae blooms, this is one of the more liked options out there. While it can be used in a filter media bag and placed in a high flow area in your sump or filter, it is best used in a fluidized GFO media reactor.

It might make the water a little cloudy, especially if you forget to rinse it off first, but other than that, this particular option is pretty decent in terms of algae control.

Kolar Labs GFO can apparently absorb up to 4 times more phosphates for the same amount of GFO than some other brands, or at least, so it is advertised. In other words, it lasts for a long time and does not require changing for quite some time as well.

At the same time, it is fairly quick-acting and should begin working as soon as you put it in the tank. This stuff is considered to be high quality and is best used for high-end reef tanks.

This is not the kind of thing you buy for smaller at-home tanks with just a couple of fish. Another neat part about Kolar GFO is that it can be safely used in all kinds of tanks included reef, freshwater, and saltwater too.

The quick-acting formula and the long-lasting nature of this stuff make it one of our favorite algae control options. On a side note, this particular option should only be used in a reactor and it definitely needs to be washed first. It is known to make the water a little cloudy on occasion.

What Is GFO & How Can It Help?

It has also been called red iron and is actually very similar to rust. When it comes to aquariums, especially reef tanks, these granules can be placed in a filtration bag, in a filtration chamber, or directly into a GFO reactor as well.

The purpose of GFO is to remove phosphates from the water. In other words, it is a chemical filtration media with the specific purpose of removing phosphate from the water column. The point of it is to reduce and stop the growth of algae, as algae require lots of phosphates to grow and multiply.

Therefore, if you have an algae problem in your reef tank, getting some GFO pellets and a GFO reactor can make a big difference and make life a whole lot easier in terms of maintaining a clean and pristine reef tank.

How Much GFO To Use?

The amount of GFO that you use in your reef tank is quite important to keep in mind. If you do not add enough of it, it will not be effective at removing phosphate to the point where algae blooms stop.

Something that most other people fail to mention or realize however is that adding too much is not good either. While you do want to limit the number of phosphates in the water, when it comes to coral reefs, corals do need a bit of phosphate to be happy and healthy, so you do not want to add so much GFO to the water that it completely removes all phosphates.

Remember to keep your corals alive and always measure your phosphate levels to see exactly how effective the GFO is which you purchased.

What Does A GFO Reactor Do?

First off, some people are perfectly fine with putting the GFO in a media bag and placing it in the sump or in the filtration unit that is already installed in the tank. Yes, this works just fine to remove phosphates from the water, but “just fine” is the operational term there.

This stuff tends to stick together when there is no water movement, which is quite the problem when it comes to efficient phosphate absorption.

A GFO reactor is a special little reactionary chamber, much like a bio-pellet reactor. The point of a GFO reactor is to provide the GFO with its own home outside of a filtration unit, with the main benefit being increased effectiveness and efficiency. In other words, these reactors keep water flowing through them at a high rate and they cause the GFO media to tumble around a lot.

This stops the granules from sticking and clumping with each other. The point is that if the granules do not stick and form clumps, there is more surface area for them to absorb phosphates. In layman’s terms, a GFO reactor increases the rate of absorption which GFO brings to the table.

Yes, to a certain extent. Silicates are a type of salt that contain silicon and oxygen. There are certain types of algae that feed off silicates. Therefore, removing them from the water is quite important as well.

GFO is pretty good for removing silicates from tank water, but not quite as good as it is at removing phosphates. However, in terms of algae control, it should work just fine.

Remember folks, algae blooms can happen more or less overnight, and once they occur, they are much harder to control than they would have been to prevent. GFO is the best way to remove phosphates and silicates from the water, thus stopping algae in its tracks.

Also keep in mind that while this stuff can be used without a GFO reactor, using the reactor is highly recommended. In terms of a recommendation, we would go with our own top pick, but any of the other options work pretty well too.