Need help finding the right companions for your African Dwarf Frogs? we have put together a list of our best 10 tank mates. 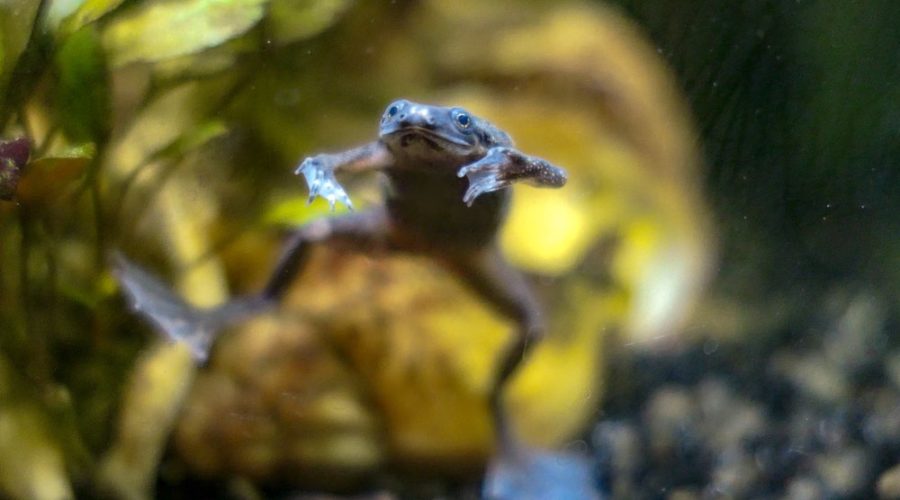 Like all animals, your African dwarf frog might get a little lonely. As we all know, you can’t house certain aquatic animals with one another, while others do just fine in a community. So, the question of the day is what are the best African Dwarf Frog tank mates?

African dwarf frogs are some really neat creatures no doubt. They don’t grow too large, only around 2 inches at most, so they don’t need too much room. Moreover, they are very easy to take care of, can handle different water conditions, and are not picky eaters either.

Here we have a list of our top 10 companions to consider:

Here are some of the best types of fish and creatures that you can house together with your African Dwarf Frog. Based on their diet, temperament, and space requirements, the below options are definitely the best ones to consider.

The guppy is also known as the millionfish or rainbow fish (we have covered the different types of Guppies on this article). They are some of the most popular tropical freshwater fish out there.

The guppy is a live bearer, meaning that it gives birth to live fish as opposed to laying eggs which then hatch into fish externally. The guppy is a very adaptable fish that can handle a variety of ecological conditions.

They are fairly hardy and can survive in many different conditions and water parameters. They can definitely live in the same water as an African dwarf frog.

Moreover, the guppy is fairly small, so it won’t take up too much room. It is also very peaceful and will get along with the frogs just fine. Moreover, both the African dwarf frog and the guppy eat the same things, that being insect larvae, so feeding is made easy too.

While mollies are known to be slightly aggressive towards other fish whom they may see as a threat, they tend to get along with other creatures quite well.

Every indication points to the fact that mollies and African dwarf frogs will get along just fine. The frogs are quite peaceful, so they definitely won’t attack a molly, plus the mollies are just too small to do any damage to the frog even if it wanted to.

Moreover, the molly is a very versatile fish that can live in many different conditions, and can even be acclimatized to both salt and freshwater. In terms of water parameters, they are fairly hardy and can handle some change. Also, they eat many of the same foods as the dwarf frogs eat, so there should be no issue there either.

Mollies are very easy to take care of. The only thing to look out for is in case the mollies breed, as they are live bearers, which means that the frogs may eat the fish fry. However, unless you are breeding the mollies, this will not be a problem.

The platy is yet another good livebearer fish to house with an African dwarf frog. They give birth to live young, so if you breed them, just watch out for them being eaten by the frogs when born. However, this is only a problem if you plan on breeding them. Other than that, everything should be just fine.

Platies are extremely peaceful fish that are very passive, plus the frogs are passive too. Combined with the fact that both creatures are roughly the same size, you can be sure that they won’t hurt each other. Also, both the frogs and the platies eat roughly the same foods, making feeding a breeze.

There is also the fact that both animals need roughly the same water conditions to live in. Just like other livebearers, platies make for excellent African dwarf frog tank mates.

Dwarf gouramis make for excellent African dwarf frog tank mates, and it is not just because they both have the word “dwarf” in their names. In fact, this type of gourami is referred to as a dwarf because it is one of the smallest gourami species out there.

Gouramis grow to around 2 inches in length, or about the same size as the African dwarf frog. This means that there is a minimal chance of confrontation as both creatures are very peaceful and passive, plus even if they wanted to, they couldn’t really do any damage to each other.

Other than that, gouramis are omnivorous, but they eat mostly algae, plant matter, and some insect larvae too. Gouramis are not live bearers, meaning that they lay eggs, but dwarf frogs don’t really enjoy fish eggs, so that is no issue either. Also, both animals live in roughly the same conditions, so that is fine too.

Ok, so we all know that betta fish can be very aggressive, especially with fish of the same size and other betta fish. However, for one reason or another, betta fish do not seem to have any problems with African dwarf frogs. That being said, betta fish can be a little testy and do on occasion take issue with other creatures.

So, while it should be fine, keep an eye on how the two get along with each other. They get along just fine, so in terms of compatibility, there is really no issue (for the most part).

Betta fish are carnivorous for the most part, but the frogs are too big to eat, plus if the frogs lay eggs, betta fish are not really known for eating them, so everything is fine there.

You will have to feed them slightly different foods on occasion, but both will eat small insects and insect larvae, so you can always go with those.

Technically speaking, the corydora is a small species of catfish, one that can grow to around 4.5 inches in length. So, in terms of size and aggressiveness, both the corydora and the African dwarf frog will get along just fine.

Even though the corydora is substantially larger than the frog, it is very peaceful and will not attack the frog. And on the other hand, dwarf frogs are also very peaceful. Corydoras are bottom feeders, meaning that they suck up vegetable matter and insects/insect larvae from the bottom of the tank (more on the ideal foods for them on this post).

Even if they dwarf frogs lay eggs, they make bubble nests which are at the top of the water. In short, both animals are safe around one another. Moreover, both of these creatures can survive in virtually the same water conditions, so there is no issue with water parameters either.

The danio is yet another good tank mate for the African dwarf frog. Now, there are various species of danios out there. The best ones to go with would be the giant danio or zebra danio. The zebra danio is roughly the same length as the frog and the giant danio is quite a bit bigger.

All of that being said, both creatures are peaceful, plus the frog is too, so they are not about to get into fights with each other, nor will they try to eat each other. You do not want to get really small danios, as the frogs may eat them, but the larger ones will do just fine.

Moreover, danios eat smaller insects and insect larvae, so frogs have nothing to fear from them. Also, both creatures can handle about the same water conditions, so housing them together is pretty easy.

That being said, the eggs of the tetra fish may seem like a tasty snack, so just be sure to separate them for breeding. Also, the tetra fish is usually too small to harm the frog in any way. To be sure that they don’t get into confrontations, it is recommended to get a slightly large species of tetra fish.

Some shrimp like bamboo shrimp and cherry shrimp do make for decent African dwarf frog tank mates as well. The shrimp are obviously no threat to the frog, as they are too small to do anything to them.

However, you do need to be aware that some really small shrimp may be eaten or at least tasted by the frog. Generally speaking, the shrimp’s shell will protect it from the frog. Even if the African dwarf frog does try to eat it, it will most likely just spit it right back out.

Snails also make for pretty good African dwarf frog tank mates. The frogs will never eat the snails as their hard external shells make the invulnerable to the attacks of the relatively small African dwarf frog. Also, the snails do not have the ability to harm the frogs in any way. They make for good tank mates, which is mostly because they love to clean your tank! More on aquarium snails here.

African Dwarf Frog And Betta, Are They Compatible?

However, betta fish are known to be aggressive, territorial, and they can be bullies too. Therefore, if you put them in the same tank, you do have to keep a close eye on them, and if you notice issues arising, you will have to separate them.

A good way to ensure that your betta fish will not bother the African dwarf frog is to give them both plenty of space, and make sure that the tank is fairly heavily planted too.

Yes, African dwarf frogs can live with guppies no problem. The guppy and the frog are both peaceful, so they should not bother each other.

They are both very small, so housing them in a small tank is also possible, not to mention that they eat virtually the same things too, mostly small insects and larvae.

Generally speaking, most snails are too large to fit into the mouths of African dwarf frogs, and therefore they will not eat them.

However, African dwarf frogs may try to eat small snails that they can easily fit into their mouths.

For the most part, these frogs do not enjoy the hard shells which most snails have, which is why they will also only eat small baby snails, as their shells do not fully harden until they are mature.

The bottom line is that there are actually many different African dwarf frog tank mates you can go with. The above 10 are just the best ones, but there are many more as well. Just do your research before you house them together or buy them at all, so you know how to take care of them properly.